The 2019-2020 Smash 64 Power Rankings is a rankings list compiled by Andykins, Big Red, box, Dogs_Johnson, Dr.D, Josh Brody, and Pokehero due to a lack of a proper ranking for the period.

Qualifying players must have attended at least two majors (or similarly notable regionals) that was played on the NTSC-U version of the game. As a result, players who only attended one event were excluded from the rankings. To remedy this, a "Hidden Bosses" section was created, listing 10 players who likely would have qualified had they attended an additional event. The seven panelists then ranked qualifying players from #1 to #64, including a few additional players who just missed the cut into the "Expansion Pak". 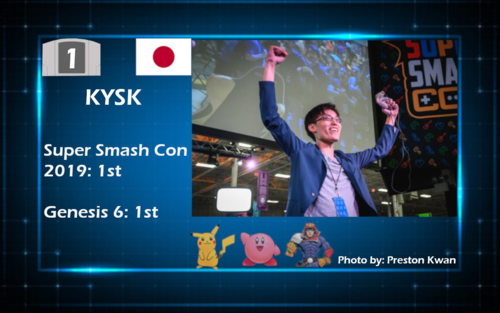 The players listed within the "Expansion Pak" were very close to making it to the main rankings, but just missed the cut. They were unranked between each other, and as such are all considered to be effectively ranked #65.

Hidden Bosses are players who likely would have been ranked had they attended at least 2, NTSC-U tournaments and did quite well at the 1 tournament they did attend.