This article is about Link's appearance in Super Smash Bros. For the character in other contexts, see Link.

Link (リンク, Link) appears as a starter character in Super Smash Bros. He is the sole fighter from The Legend of Zelda series. Link is perhaps the most well-equipped character with either long ranged and melee options of attack, with two projectiles (which would become three in later iterations), his long-reaching Master Sword and his Hookshot. His design is based on his appearance as an adult in The Legend of Zelda: Ocarina of Time.

Link is voiced by Nobuyuki Hiyama, who also voiced him in Ocarina of Time, with his voice clips recycled from the game.

Link is currently ranked 11th on the tier list, the second lowest ranked character, outranking only Luigi, and is his worst placement in the series. Link is known in high level competitive play as a very defensive character, relying on bombs and Boomerangs to prevent gimps and using his up tilt and up and back aerials for combos, while using his forward and down smash, down aerial, and projectiles for edgeguarding. Having many disjointed melee attacks and his aforementioned two projectiles, Link can be a hassle to approach, while also having an average approach himself courtesy of his extremely high traction.

However, his lack of speed and maneuverability cause problems for Link in approaching the opponent. In fact, much of Link's strategy consists of standing back, throwing projectiles, and waiting for an opening. Due to his slow ground movement and attacks, it is imperative for Link players to be able to not only short hop but be able to input an attack immediately afterward. Link's recovery is awful, and widely considered to be one of the worst recoveries in the series, making offstage play very risky. He is also very easy to combo due to his weight and being a fast faller. Link's recovery and combo vulnerability make many of his matchups difficult. Link is slightly better in the PAL version due to having faster air speed (improving his recovery and some of his combo ability), and his forward smash dealing 4% more damage, and much better in the Japanese version where he is ranked 9th on the tier list, due to Link's up tilt having more reliable combo ability and sending opponents on a more favorable angle to combo, as well as his bombs being much easier to use in combos. Regardless, he has poor matchups on the NTSC-U version, and poor results due to his low playerbase. 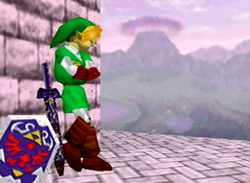 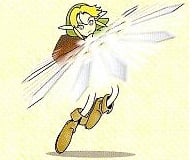 In general, Link's attacks are slow, long-ranged, and powerful. This gives him good KOing ability, with his down aerial and forward smash being especially powerful finishers. However, his moves are laggy and easy to punish if they aren't landed. His grab is also ranged, being one of the three tether grabs in the game, but it is also very slow and leaves Link very vulnerable if it misses. Link himself is also rather slow, with the second lowest dashing speed in the game and very short jumps. Despite this, his air speed and walking speed are above average. Link is also very stable in terms of gameplay.

Link is known for relying on his two projectiles (his Boomerang and bomb) to keep his opponents away and prevent them from approaching. His projectiles can which can lead to some combos. They can also be used to edgeguard. However, while Link can camp well himself, he has trouble dealing with projectile camping from some characters (especially Fox), due to his poor mobility and jumps.

Link is also heavy, which means he is harder to KO than normal, but it along with his size also makes him easier to combo. Link has some combo moves himself, including his up tilt, back aerial, and up aerial, as well as his aforementioned projectiles. His down aerial, forward smash, down smash, and projectiles are his main edgeguarding moves. He is one of the only two characters in the game (along with Pikachu) to not have a meteor smash, which can give him some minor trouble edgeguarding.

Link's biggest problem is his recovery, which many agree is one of the worst in the series as well as the worst one of the game itself. Link's short jumps, fast falling speed (the second fastest in the NTSC-U version and the fastest in the NTSC-J version) and extremely poor distance given by Spin Attack (it even descends before the animation is over), with no options to extend it. Link is also edgeguarded and gimped easily.

Link is low on the tier list because he is very easy to combo and edgeguard, which allows many characters to get him offstage quickly and finish him off, if not zero-deathing him outright. Link relies solely on his projectile camping to avoid this. Link is not helped by the fact that Dream Land is the only legal stage in competitive play. When Hyrule Castle was legal, he could rely on projectile camping there far more than on Dream Land.

Link was severely nerfed in his transition to the NTSC-U version. Many of his combo starters were toned down or removed and his recovery is even worse, while his moves deal less damage. While the higher SDI presence makes it easier for him to escape combos, this doesn't really have an effect due to how easy he still is to combo. This makes him worse than in the Japanese version.

Link was once again nerfed in his transition to the Australian PAL version. His air speed and his double jump height were decreased, making his recovery even worse, although he is less vulnerable to juggles due to his faster fast falling speed

Link received some buffs in the transition to the European PAL version. His air speed is much higher (now being almost as high as Pikachu's) and his double jump has regained some of the height it had lost in the Australian version, improving his recovery. His forward smash has received an increase to its power, and he is also significantly heavier which noticeably increases his survivability, but also makes him even more vulnerable to combos. Ultimately, Link is stronger in the European version than in the NTSC-U version, although he did not get significantly improved overall. 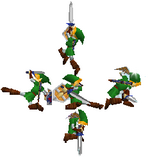 A cover of a portion of the main theme from The Legend of Zelda series.

Throughout the history of Smash 64, Link has always been regarded as one of the worst characters in the game. On the first tier list for 64, he was dead last in bottom tier, sharing it with Samus. He rose up to 11th on the second tier list then he would remain, but share the same placement of 10th-11th with Luigi on the third list. He would regain the placement of 11th tier on the fourth and most current tier list where he remains the second worst character in the game.

However, in spite of his placement, Link has achieved high results in a few tournaments due to the performance of players such as Isai, Gyaki and Sekirei. Even with these impressive placements, it is unknown if Link will ever get out of the bottom two spots that he has consistently remained in throughout the game's lifespan.

Link's boomerang (neutral special attack) goes farther if it is treated as a smash attack. Quickly tap the control stick to the side while hitting B to extend the range.

Link's extended boomerang, if used at the right distance from a ledge to allow Link to maintain momentum after dashing, results in Link going significantly further in midair during the boomerang throw animation. This is useful when performing a combo on an opponent who is slightly too far for the boomerang to hit.

Lightly throwing a bomb so that it lands on a platform near a spawning opponent is a popular mindgame as the latter will often be tempted to pick the bomb up. This results in the player losing the invincibility frames granted by the spawn.

Link pulls out a bomb and places the bomb on the ground without having it explode. When the bomb will near the explosion point while being out of explosion range, Link will have just a few frames to grab the bomb (now invisible) after the explosion. All bombs thrown by Link will become invisible.

Performing a grounded Spin Attack right after Link's initial dash while running off a ledge will result in Link continuing his spin attack in midair without the animation changing to his aerial spin attack. This rarely has any uses outside top Link players using it to edgeguard or complete combos.

Like Samus, Link can use his bombs to aid his recovery. However, unlike Samus, Link must use a bit of technical skill and timing. While recovering, one should pull out a bomb and drop it slowly below Link, then continue to DI towards the stage, and use a back aerial. This will cause Link to explode toward the platform. One should then use his Up B and land back safely. Note that Link will not be able to grab the edge because the explosion causes him to face the other direction. To counter this, one must throw his boomerang before using his Up B. This technique is extremely situational and difficult to perform. Despite the difficulty of pulling off the technique, it does not greatly help Link's recovery.

A technique popularized by Kort involving a set up of positioning a bomb for a boomerang hit as an edgeguarding technique. The technique requires Link to throw a bomb on stage opposite to where the enemy is (preferably when the enemy is offstage), followed by a toss of a boomerang against the bomb, causing the boomerang to 1) ricochet flying in the opposite direction towards the enemy, 2) accelerate at a faster speed then the previous speed then initially thrown, and finally 3) will go through Link without causing Link to catch the boomerang, allowing for Link to reduce lag caused by the grab of a returning boomerang.[1]

Link is the valiant boy hero of "Legend of Zelda" series in which he fights against the evil Ganon to recover the Triforce. Though his tools may change with each adventure, his strength and righteousness remain constant. With his trusty sword and a variety of weapons, he takes his adventures head on!