Octoroks (オクタロック, Octorok) are enemies from the The Legend of Zelda series.

Octoroks made their debut in The Legend of Zelda as a common enemy, and has become a common enemy in later Zelda games. They are small, octopus-like creatures that are commonly seen in their red variations, though their exact appearance and behavior changes throughout the series.

Octoroks are among the most basic enemies in the series. They are known for shooting rock projectiles from their cylindrical snouts, but they can be easily defeated by reflecting their projectiles back at them.

Unusually, while the Ocarina of Time version of Octoroks serves as the basis of their appearance in Melee, they were only seen in water, and never on land. 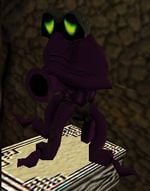 An Octorok in the Underground Maze.

Octoroks appear as a common enemy in the Underground Maze stage of Adventure Mode. Their design is based on their appearance in The Legend of Zelda: Ocarina of Time.

Octoroks attack by shooting rock projectiles at the approaching player's fighter, which deals damage and knockback depending on the difficulty. While exceedingly weak in lower difficulties, higher difficulties can scale the power of these projectiles to the point that they can potentially KO characters at high damage. The rocks can be reflected back at the Octorok by simply shielding. Octoroks can be defeated by dealing enough damage to them, which will result in an Octorok KO bonus where the player receives 150 points for each Octorok KO'd.

Octoroks are also likely to appear out of Crates and Barrels in Melee's regular battles. They are one of three common enemies that can appear out of a container item, the other two being Goombas and ReDeads.

Octorok
These common enemies made their debut in the very first Legend of Zelda game and have been a staple of every game in the series since. They shoot rocks from their mouths at high velocity, but the projectiles are simple to block and do very little damage. Octoroks have low stamina, so they don't pose much of a threat to good fighters.

The Ocarina of Time version of the Octorok appears as a sticker.

The Octoroks appear as enemies. Their design is based on their appearance in The Legend of Zelda: Skyward Sword. Octoroks usually remain hidden beneath a bush, making them invulnerable to all attacks except grabs. Similar to their Melee counterparts, when a player's fighter approaches, Octoroks can shoot rock projectiles. The Octoroks can be defeated by dealing enough damage to them or reflecting their rock projectiles back at them.

This monster looks kinda like an octopus, but it shoots rocks out of its mouth. They've been around since the very first Legend of Zelda game, and the Octorok from Skyward Sword appears in this version of Smash Bros. They'll hide underground, emerging to fire at nearby fighters. If you're quick, you can run forward and pluck them out.

Since the very first Legend of Zelda game, these monsters have been popping up to pelt Link with rocks, and in Smash Run, they'll do the same to you if you get close. Stand right next to them, though, and they'll hide again. Use moves like Reflector to send the rocks back, or close in quickly and try to throw them.

The Skyward Sword version of the Octorok appears as a Novice-class primary spirit.

Octorok's Spirit Battle uses an army of Diddy Kong puppet fighters and are fought on the Great Bay stage. During the battle, Diddy Kong favors their Peanut Popgun move, referencing how Octoroks attack by spitting projectiles at Link.