Not to be confused with Giga Bowser. 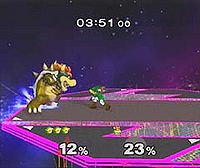 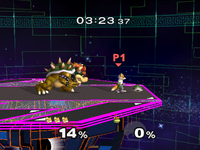 Giant Bowser appears at the end of Adventure Mode, where he is fought at Final Destination. Under most circumstances, he acts as the final boss of the mode, and defeating him allows the player to finish the mode. However, if the difficulty is set to Normal or higher and the player defeats him within 18 total minutes, Giant Bowser will transform into Giga Bowser upon being KO'd. From there, the player must defeat Giga Bowser to clear the mode.

As a cosmetic change, Giant Bowser uses Bowser's black palette swap if he is fought on Normal difficulty or higher.

Extra appearances by Giant Bowser include an immensely large version that appears, controlled by the player, in Event 25: Gargantuans against the computer-controlled similarly sized DK. He also reappears in Event 42: Trouble King 2, where the player, as Luigi, must KO him twice.

Giant Bowser can appear in Classic Mode as a possible giant opponent in Stage 8. Aside from this, Giant Bowser's closest resemblance to being a minor boss like he was in Melee is in the solo event Event 27: Three-Beast Carnage. He appears alongside Giant DK and new minor boss Giant Charizard, appearing to attack New Pork City. The player's assigned character in this solo event is R.O.B.

Giant Bowser acts only as the penultimate opponent in Round 6 on Mushroom Kingdom U of Yoshi's Classic Mode route before both the Bonus Game and boss fight against Rathalos in the final round, possibly referencing a recurring element from the Yoshi's Island series in which Kamek transforms baby Bowser into a giant upon the latter's defeat.

He also appears in the Spirit Battles of Baby Bowser, Groudon, Volcanion, Ifrit, and Magnamalo.