The Polar Bear (ホワイトベア, White Bear) is an enemy from the Ice Climber universe. 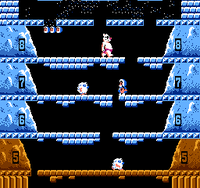 A Polar Bear as it appears in Ice Climber. 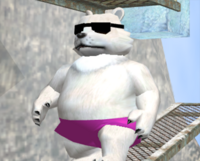 A Polar Bear on Icicle Mountain in Melee.

Polar Bears serve as an enemy in the game's Adventure Mode. In Stage 10: Icicle Mountain, Polar Bears can sometimes be seen in the first part of the stage. They walk back and forth on the various platforms, and sometimes jump in order to force the screen to scroll up. They despawn when the Ice Climbers appear.

While a rare occurrence, Polar Bears are among the enemies that can potentially spawn from Crates and Barrels. In these cases, it is possible to pick up the enemy with a grab, then throw them at opponents; because of the Polar Bear's high weight, it can effectively one-hit KO opponents when smash thrown.

By KOing a Polar Bear in either regular matches or the Adventure Mode, the player is awarded the Polar Bear KO bonus, which is worth 800 points, the most for an enemy. The bonus also stacks if the player defeats more than one.

Polar Bear
This bizarre beast appears whenever the Ice Climbers take five during their ascents. Each leap the upright bear makes causes an earthquake and makes the mountain scroll upward. If the climbers fall off the bottom of the screen, they'll drop into a bottomless chasm. For reasons unknown, it sports pink shorts and sunglasses. 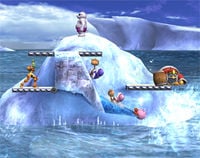 A Polar Bear standing on the top of Summit.

The Polar Bear stays in the background when the stage regrows. However, it will be blown off the stage when it breaks off again, though it will still respawn when the stage ends up in the water again.

The Polar Bear appears as an uncommon enemy. Like in Melee, it regularly walks forward on the platforms, and it sometimes stops to jump in place, dealing significant damage when it lands. It has high HP and a resistance to grabs, but it is weak to flame attacks which even make it flinch. Owing to its above average strength it drops more power-ups than regular enemies.

This free-spirited polar bear usually just wanders around aimlessly, but sometimes he likes to shake things up a bit. Literally! He'll jump in the air and then land hard, causing a huge earthquake that makes the whole screen shake and does damage to anyone on the ground. He's not keen on heat, though, so hit him with fire attacks!

This free-spirited polar bear usually just wanders around aimlessly, but sometimes he likes to shake things up a bit. Literally! He'll jump in the air, and then land hard, causing a huge earthquake that makes the whole screen shake and does damage to anyone on the ground. He's not keen on heat, though, so hit him with fire attacks!

A Polar Bear with Kazuya on Summit.

A Polar Bear can be seen teetering precariously on the icy mountain in Iceberg. Additionally, the Polar Bear also reappears on the returning Summit stage.

The Polar Bear also appears as an Ace-class support spirit. It can be summoned using the cores of Bewear and Freezie.

In Adventure Mode: World of Light, the Polar Bear is presumably one of the countless spirits captured by Galeem during his takeover of the universe. The Polar Bear's spirit is located in the icy mountain section of The Light Realm.