This article is about Giga Bowser in general and his appearance as a boss. For his regular appearance, see Bowser.

For his appearance as Bowser's Final Smash, see Giga Bowser (Final Smash).
Not to be confused with Giant Bowser.

In Melee, Giga Bowser appears as a hidden final boss. To encounter him, the player must reach the final stage of Adventure Mode on Normal difficulty or higher and defeat him within 18 minutes. If done correctly, a new cutscene will be shown after Giant Bowser is defeated - his KO'd trophy will return to the stage and be struck by lightning, causing it to come back to life as Giga Bowser. Defeating Giga Bowser leads to the completion of the Adventure Mode; defeating him without using a continue rewards the player with his trophy.

Giga Bowser also appears in Melee's final Event Match, alongside Ganondorf and Mewtwo. The match is similar to his appearance in the Adventure Mode, but with the presence of two teammates. Clearing the Event Match allows the player to use Final Destination as a Versus stage, as well as rewarding Final Destination's trophy; as an added bonus, clearing the match without losing a stock rewards the player with an exclusive Notice.

Unlike most other bosses, Giga Bowser has a damage percentage as opposed to HP (in both of his appearances) and takes knockback; the player must KO him by knocking him offstage as opposed to merely attacking him.

Although winning with Giga Bowser usually crashes the game, he can sometimes "appear" on the Results screen.

If the game is hacked through the use of the debug menu, it is possible to use Giga Bowser as a character. Giga Bowser is mostly functional, and his name is even displayed on the Jumbotron in Pokémon Stadium (as "G-Bowser"). Internally, Giga Bowser is known as GKOOPS. He posseses 20 units of knockback-based armor.

Due to a lack of victory poses to display for him on the results screen, the game will usually crash if Giga Bowser wins a match, due to a panic event being called.

When the game is played on the Dolphin emulator and panic events are deliberately suppressed, when Giga Bowser wins a match, the game will not freeze, and the results screen will appear. The game, however, will display Sheik's name in red, and Giga Bowser's stock icon will be a Target. The announcer, however, will properly say Giga Bowser's name.

Giga Bowser
An even more imposing figure than the original King of the Koopas, Giga Bowser is roughly twice the size of his scaly, fire-breathing, spike-studded Super Smash Bros. Melee counterpart. Predictably, this monstrous creature's offensive and defensive powers are a grade higher than those of regular Bowser. Good luck defeating this colossus! 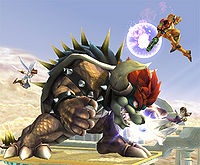 Giga Bowser makes his debut as a semi-playable character in the Smash series as part of Bowser's Final Smash. When the Final Smash is activated, Bowser transforms into Giga Bowser, allowing players to take advantage of his increased power and range, as well as different hitbox properties. While Giga Bowser does not flinch during this transformation, the transformation only lasts ten seconds.

Outside of this appearance, as well as his related trophy, Giga Bowser does not make any other appearances in Brawl, and SSB4.

In Ultimate, due to full-moveset transformation Final Smashes being removed, Giga Bowser forgoes having a full moveset, instead acting akin to the Dragoon, where he teleports to the background and allows the player to aim a punch. The punch deals 40% damage, and causes an instant Screen KO for opponent(s) at 60% damage or greater. 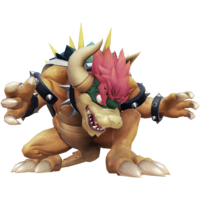 Giga Bowser as he appears as a boss in Super Smash Bros. Ultimate.

Giga Bowser appears as a boss in Classic Mode for Mario, Captain Falcon and Sephiroth. For the first two, Bowser initially appears instead of a boss on the final stage; once he is KO'd, a cutscene plays where he transforms into Giga Bowser, similarly to the final stage of Melee's Adventure Mode at high difficulties. A Maxim Tomato appears for recovery as the battle begins. This does not happen in Sephiroth's route, as he fights Giga Bowser straight away, and in the second to last round. Unlike Melee, Giga Bowser almost never flinches from attacks, and the player must deplete his HP to defeat him, as opposed to being launched off the screen, just like every other boss. Following Smash 4, he utilizes Bowser's moveset from Brawl. Additionally, he moves slower as his attacks now have much more startup lag.

In World of Light, Giga Bowser is first fought in the Molten Fortress sub-area of the Light Realm map, and then fought again during the Final Battle like every other boss. The player faces him on the Final Destination stage, while the Giga Bowser theme is playing. Unlike other boss battles, defeating him will release the regular Bowser as a playable character from Galeem's control, instead of both appearing separately on the map (as is the case with Ganondorf and Ganon). He's fought for a second time during the true final battle with Galeem and Dharkon. During the battle's second phase, Giga Bowser is the second Light Realm boss to appear on screen, which might indicate him being the second boss in the game.

While difficult, because his armor is no longer unlimited and instead has a threshold of 95 knockback units, it is possible to make Giga Bowser flinch or even launch.[1] Cloud's Limit Break and Hero's Hatchet Man are a couple moves that can launch him, as well as countering many of his single-hit attacks (some slow or multi-hit counters like Peach's, Palutena's, and Greninja's are unable launch Giga Bowser); Mii Swordfighter's Blade Counter will cause Giga Bowser to flinch and cancel his attack, even if the retaliating hit doesn't launch him. Since his attacks do less damage on lower difficulties, the player will need to use stronger counters (e.g. Joker's Tetrakarn) or to counter his stronger attacks like forward smash. This allows the player to see his knockback animations, double jump, aerial up special, and ledge options. Pac-Man's Fire Hydrant and (to a lesser extent) Steve's blocks cause Giga Bowser's AI to act strangely, such as jumping after Flying Slam or performing a dash turnaround[2] and landing Flying Slam off-center or potentially Bowserciding.[3] If Giga Bowser is hacked to have a regular increasing damage percentage (see below), standard attacks at high damage can also break the knockback threshold.

All move names are sourced from the Japanese Dairantō Smash Brothers SPECIAL Official Guide. As there are no official English localized listings for the moves, many of the names used here reflect the Japanese names for certain subjects.

Much like in Melee, Giga Bowser can only be played via hacking or modding. However, his moveset is significantly restricted, including the removal of dashing, dash attack, down tilt, neutral aerial, and down aerial. However, despite these changes, Giga Bowser retains Bowser's more primeval moveset from Brawl, such as the older back aerial.

Changes from SSB4 to Ultimate[edit]

Giga Bowser has been significantly nerfed from Smash 4 to Ultimate. Unlike in his previous appearance in general, many attacks have been made much slower, possessing a significant amount of start up lag, ending lag, and landing lag, as well as his jumpsquat being the slowest to jump in the game (taking up to 15 frames to complete). These changes—few of which are positive—make his attacks very easy to avoid, and were most likely made to balance out his status as a boss, making it among Giga Bowser's weakest appearances in the series. However, he still possesses a significant amount of passive knockback-based armor, meaning that he can often counterattack most punish attempts with ease, as well as be extremely hard to launch without counters.

Differences between Bowser and Giga Bowser[edit]

Undoubtedly the most dramatic transformation between Bowser and Giga Bowser is the clear difference between their sizes; Giga Bowser is almost twice as large as Bowser, and even if Bowser is under the influence of a Super Mushroom, Giga Bowser is still slightly larger than him. Visually, Giga Bowser has more pronounced physical features than the normal Bowser; aside from the aforementioned size, Giga Bowser has longer and less-bulky limbs with more toned muscular regions, sharper fangs, claws and shell spikes, a less rounded snout, larger horns, spikier hair, a more realistic shell, larger feet, bloodshot eyes, and a darker overall skin tone.

As Giga Bowser's larger frame implies, he is considerably heavier than Bowser; when fought in Adventure Mode, he is also given knockback-based armor to make him even more difficult to KO; a subtractive threshold of 20 KB in Melee, and a non-subtractive threshold of 95 KB in Ultimate. Adding to this, Giga Bowser also takes minimal hitstun from attacks, making him effectively unable to flinch from some attacks due to making them unsafe on hit. Just like Master Hand and Crazy Hand, Giga Bowser cannot be grabbed, inhaled by Kirby, or egg laid by Yoshi, severely limiting combo options outside of those started from attacks. In order to compensate for Bowser's ordinary sub-par recovery, Giga Bowser's Whirling Fortress grants significantly more height, and it also has 26 invincibility frames; its large hitboxes also give multiple pseudo-invincibility frames after this, making it a very safe move and arguably one of the safest in the series. It is faster than his Frame 7 Jab, sitting at Frame 5, making it one of the best out of shield options in the game, on top of his already formidable shield game padded by the grab immunity. If Giga Bowser captures an opponent with Koopa Klaw, he can bite his opponent, but the pummel will whiff on Yoshi, and Pichu if mashed too fast. It can also whiff on the first hit with a few specific characters, although these circumstances can be rare. In addition to this error, Giga Bowser's fastfalling speed is identical to his ordinary falling speed, making landing difficult.

As a transformation of Bowser, Giga Bowser's moveset is identical to his and he usually has passive super armor. His attributes, however, are significantly altered. His attacks are considerably stronger in power and knockback. Some of Giga Bowser's attacks also have different properties as a result of his transformation; Fire Breath, for instance, does not run out or become weaker the longer it is used, as well as having a longer range (in Ultimate, it can carpet the entire surface of Final Destination; however, unlike his past appearances, his fire runs out after a period of time.). In addition, many of Giga Bowser's attacks are given unusual hitbox properties: his claw-based attacks (side tilt, up tilt, down tilt, edge attacks, forward aerial, forward throw, and back throw) all have a darkness hitbox; his shell-based attacks (his up smash, neutral aerial, back aerial, down aerial, and up throw) all have electric hitboxes; his horn-based attacks (his forward smash and pummel) have explosion effects; and his down smash has freezing properties, as does Whirling Fortress when used on the ground.