This article is about Bowser's down special move. For Yoshi's similar move, see Yoshi Bomb. 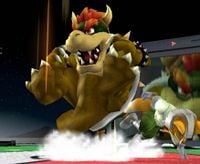 When Bowser lands during the ground pound, he suffers significant ending lag, leaving him defenseless for a short period of time. However, he is still able to grab onto stage edges while falling as long as he is close enough to one, which eliminates the ending lag and also allows for an effective edge-guarding technique on opponents who are close to the edge while attempting to recover or hanging from the edge itself, as long as they are not affected by the initial intangibility frames.

In SSB4 and Ultimate, Bowser Bomb deals drastically more shield damage, being able to shatter a full shield if all its hitboxes connect. However, this can be troublesome to perform, as the opponent may slide out of harm's way on the initial hitbox. In Ultimate, the perfect shield mechanic changes make it much easier to escape, as a perfect shield against the first or second hits give more than enough time for a player to escape. However, doing this on reaction can be difficult.

In all Smash titles, is possible to edge cancel Bowser Bomb, as it has a very early ledge grab window that lasts throughout the drop's duration. This works regardless of direction, and can be performed through precise positioning prior to the leap from the ground, or simply using it in the air. It's possible to repeatedly "chain" these edge cancels together, making for an unwieldy but somewhat effective edgeguarding tool. This maneuver was buffed in Ultimate, as the drop will meteor smash opponents, though it is difficult to time.

However, an edge-cancelled Bowser Bomb requires precise positioning to successfully grab the edge. This positioning is made even more difficult by the fact that if Bowser is moving horizontally in the air before using Bowser Bomb, Bowser will continue to drift in that direction during the stall portion of the move, which can lead to unintentional SDs. Furthermore, because Bowser lacks any protection during the move outside of the innate Tough Guy ability in Smash 4 and Ultimate, it is fairly easy to challenge an edge cancelled Bowser Bomb if close. Thus, spacial awareness is necessary to succeed with this technique.

The Giant Bowser falling glitch is a bug involving Bowser or Giga Bowser when affected by a Super Mushroom, exclusive to Super Smash Bros. Brawl. The glitch occurs because Bowser's origin point fails to hit the ground, thus causing him to get stuck in place. In the case of Giga Bowser, this can prevent him from doing anything until the transformation ends.

The glitch can be performed on a triangular area of a Custom Stage, of which the slanted surface is a ramp or stairs. Below the ramp, there needs to be a gap with blocks at the bottom, horizontally level with the lowest set of stairs. The gap must not have an opening. Above the ramp must be blocks horizontally level with the highest set of stairs so that Bowser does not go past the stairs or slide down them. In the case of Giga Bowser, the player should position him so that his left leg is between the middle and bottom set of stairs, and then use Bowser Bomb. The player should see Giga Bowser's falling animation, but he fails to actually land. When the Final Smash ends, Bowser will become trapped beneath the stairs.

The glitch can also be performed using a 3x3 area made of small blocks with the center empty and the bottom-middle as a soft platform, which is where the player will stand. This setup gives more leniency and allows for Bowser to perform the glitch in a Special Brawl set to Mega if he gets a Super Mushroom. This also allows him to simply jump and perform the glitch under the same conditions. The glitch will cancel itself when the Super Mushroom wears of or, for the jump, performing an attack.[1]

The move is based on Bowser's attack pattern in Super Mario Bros. 3 during his final boss battle, where he jumps diagonally forward and does a Ground Pound while facing the screen to attack Mario, breaking bricks below him. To beat him without power-ups, Mario has to make Bowser break all bricks on an area with the move, causing him to fall downwards into a pit. Bowser uses a similar move in the final battle in Super Princess Peach.