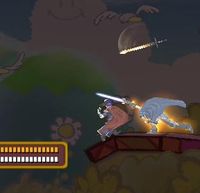 Ike's super armor from his Aether move. Notice how Ike didn't take any knockback from Marth's Critical Hit, which is an invariable OHKO under standard circumstances.

Armor (spelled armour in the PAL version of Smash Smash Bros. 4), also called flinch resistance or knockback resistance, is an effect of certain moves or actions in all Super Smash Bros. games. It was first introduced through Kirby's Stone move.

Armor is the concept of sustaining hitlag and damage, but not sustaining any knockback or sustaining reduced knockback. Most instances of armor have full damage taken; however there are exceptions. Some instances of armor, such as Piranha Plant's Long-Stem Strike or Mega Charizard X, can reduce what is taken during knockback calculation. Grab hitboxes ignore all variations of armor. This is not to be confused with invincibility or intangibility, mechanics where characters are hit, but sustain no damage or knockback at all; in the case of invincibility, the hitbox connects and thus hitlag is sustained, while in the case of intangibility the hitbox does nothing.

When a character has super armor, or infinite knockback resistance, they will not flinch nor take any knockback when attacked by a harmful hitbox, but flinchless hitboxes (like "windboxes") will still move the character. All bosses except Giga Bowser in Super Smash Bros. Melee and Master Core's doppelganger form in Smash 4 use this trait or an equivalent. However, they also cannot be grabbed, removing the main form of counterplay to armor itself.

Super armor has been given to a variety of moves, with no true definition in terms of consistency. It has been given to some fast attacks and even grabs, such as Charizard's Fly and Little Mac's KO Uppercut, respectively. Many Final Smash transformations, such as Mega Lucario or Giga Bowser, also grant passive super armor. Some attacks may also give an opponent super armor to prevent animations from being interrupted, like Mario's Cape in Melee, Super Smash Bros. Brawl and Smash 4, and Ganondorf's Flame Choke in Brawl.

Most moves that use super armor are slow to offset the power of the mechanic, making them easily avoided. However, it isn't uncommon for them to deal significant shield damage as well, such as Little Mac's low angled forward smash. Some can also outright break shields, such as Warlock Punch when reversed. However, most moves with super armor are also very unsafe on shield, especially with perfect shields factored in, giving them an inherent form of counterplay. Some moves using super armor also have inherent drawbacks programmed in, such as Kazuya's Rage Drive depleting his Rage mechanic if it misses and only being usable once per stock if it connects.

Smash 4 introduced numerous Custom Specials with super armor as alternatives to the default ones. Some of these were extremely quick or lasted long lengths of time, such as Volatile Breathing and Stubborn Headbutt. Custom Specials also allowed characters such as Toon Link to access armor when they otherwise wouldn't, in this case with Flying Spin Attack. 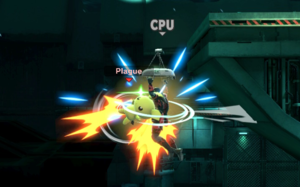 Snake's Cypher being hit by Pichu's neutral aerial, but armoring through thanks to damage-based armor.

Damage-based armor was originally introduced as a HP mechanic for Kirby's Stone, wherein it would sustain damage until it reached below a set value. This has since been dubbed "Cumulative damage-based armor". Non-cumulative damage-based armor was introduced in Brawl, specifically for Snake's Cypher. Under the effect of damage-based armor, characters will suffer hitlag and damage, but not flinch or take knockback unless the attack deals enough percentage to go over a defined threshold. For example, Byleth's Aymr in Super Smash Bros. Ultimate will handle up to 30% from frame 34 onwards before it can be interrupted, but dealing above 30% will interrupt it during its duration. This mechanic isn't to be confused with Belly Super Armor, a similar mechanic where King K. Rool's belly will protect him from attacks.

Damage-based armor is usually applied to attacks used by super-heavyweight characters such as Charizard and Bowser to make up for their slow but powerful attacks. Most of the time, moves with this mechanic have low percentage thresholds for breakage, usually not going above 8%. Naturally, there are exceptions to both of these rules, with characters such as the aforementioned Byleth having the mechanic applied to generally powerful attacks instead, even with high thresholds.

This mechanic isn't without its weaknesses, however. For one, many moves, such as Bowser's tilt attacks, have very low thresholds, making the armor completely useless in high-damage matchups, especially heavyweights. Moves with the armor are typically very unsafe on shield or whiff, meaning they can't be used without a plan and/or spacing. The attacks also tend to have low active armor frames in comparison to others, so they cannot be used for survivability very often; there are exceptions, however, most notably Little Mac's Straight Lunge. All the usual weaknesses of armor also apply, with moves such as Crownerang easily having the armor ignored by grabs due to the slow nature of the attack.

Ryu and Ken's Focus Attacks have a unique form of damage-based armor which accumulates its threshold every frame. It also lasts for only a single hit, allowing moves with multiple hits to break it. As of Ultimate, their thresholds begin at 14% and rise at 0.24% per frame, before finally capping out at 28%. Ken's armor frames also end a frame later than Ryu's[1].

In Super Smash Bros. Ultimate, damage-based armor was distributed to a wide variety of characters. It also introduced the 1v1 multiplier, which causes characters to take more damage from attacks in one-on-one matches. In general, this does not alter whether an attack can break a move's armor: the extra damage taken is applied after all other calculations, including deciding whether the armor breaks. However, in the case of hitting an armored opponent more than once (or with a multi-hit attack), the higher damage dealt by previous hits may alter whether the next hit will succeed. For example:

Bowser using Tough Guy in the air to armor through a specific hitbox of Thunder Jolt.

Knockback-based armor was introduced in 64 as a fighter ability for Yoshi's double jump. This mechanic is used to prevent opponents from being knocked back unless it reaches a certain threshold in units. Some forms subtract the amount from the knockback received during calculation (known as subtractive knockback-based armor), such as the aforementioned Yoshi's double jump and Giga Bowser and Nana's Melee appearances. Others, however, follow damage-based armor's system, not sustaining knockback until the threshold is surpassed. Crouch cancelling also gives a form of knockback resistance, although in Smash 4 and Ultimate, this has changed to be a 0.85× knockback multiplier. Because of this, crouch cancelling improves Bowser and Kazuya's Tough Guy and Tough Body abilities, respectively. The way knockback-based armor works varies by game and move. For some moves it will subtract the knockback, making the difference between the threshold and knockback received what is taken. This was covered on the Japanese Super Smash Bros. website, covering Yoshi's double jump in 64. For other moves, however, it will instead have characters take full knockback when the threshold is surpassed. In these cases, knockback-based armor is separated by prefixes Subtractive and Non-Subtractive.

This armor's nature means that its effectiveness directly correlates to the user's percentage. As they take more damage, their received knockback increases; ergo, knockback-based armor becomes harder to use as a game goes on. This also means that there will be a distinct cap on the armor in every matchup, and against characters that hit harder, such as heavyweights, the armor can even be completely ineffective. Effects that increase knockback, such as rage, will also further reduce the armor's effectiveness. Some characters can also increase their knockback by way of multipliers, such as Hero's Psyche Up, which will assist greatly in breaking through.

Knockback-based armor is polarizing in terms of viability. Being generally quite low in numbers - only really notable for jabs - it rarely sees relevance during gameplay. However, moves such as Power Pellet and Yoshi's double jump are notoriously hard to break due to their extremely high thresholds, often being able to take smash attacks at what would otherwise be a KO percentage. For example, it takes over 70% from Samus' Charge Shot at full charge to break Yoshi's double jump armor in Ultimate.

The Metal Box offers knockback-based armor in that it gives users 30 units of subtractive knockback-based armor. Combined with the increased weight, the fighter will never flinch if the total knockback taken is less than or equal to 0, which can be a substantially long length of time. However, the knockback resistance is ignored if the fighter is hit by an attack that has the bury effect like most forms of armor.

In Ultimate, given that knockback is calculated before the 1v1 multiplier is applied to damage, knockback-based armor is unaffected by it. However, as in previous games, moves like Hero's Oomph and Psyche Up that do apply their modifications before knockback will affect it. Stale-move negation can also affect this through the freshness and staleness multipliers.

Faux super armor occurs when two characters are hit with the same hitbox while one has the other in a grab. Whoever has higher controller port priority takes full damage but only flinching slightly from the attack, while the other takes full damage and full knockback.

This is often utilized for the Omnigay, a doubles combo popularized by Omni. This consists of having Meta Knight or Kirby use their up throw to send opponents close (or past) the blast zone, before a partner Snake blows up C4 attached to either character. This leaves the thrower unharmed, and the victim instantly KO'd. Due to the introduction of throw invincibility in Smash 4 and more characters having throws akin to the ones used in the strategy, this has technically been buffed in the post-Brawl games, despite the removal of Faux super armor.

In Brawl, when a grab connects with a character that also has an active hitbox, the character that attempted the grab takes the full damage from the hitbox but not the knockback, giving the illusion that grabs have a form of armor. However, this will only occur if the grab actually connects with the other character's hurtbox, and in both previous games, the same character would not have taken the damage.

In Smash 4 and Ultimate, this situation is reversed; the character that attempted the grab will now take full damage and knockback from the hitbox, and the other character will simply be grab released and take 3% damage (or more if the grab came from a special move and the grab itself dealt damage, like the beginning of Falcon Dive). In Ultimate specifically, a clash between grabs will also have characters take this damage, with an appearance similar to that of throw teching in traditional fighting games.