Link fighting a Darknut in The Legend of Zelda: Twilight Princess HD.

Darknuts made their debut in The Legend of Zelda as a common enemy, and has become a recurring enemy in later Zelda games. They are large knights who wear armor and carry around a large sword and a large shield.

Darknuts are known for their status as minibosses in The Legend of Zelda series. In The Legend of Zelda: Wind Waker and in later Zelda games, they use advance swordfighting techniques while their heavy armor gives them heightened defense. During their miniboss battle, if the player attacks the Darknut enough times, they will lose their defensive armor, but will become faster and more agile in the process.

Despite it's major appearances in The Legend of Zelda series, the Darknut trophy only references Twilight Princess.

Darknut
A knight enemy clad in heavy armor that defends with a shield and attacks with sword techniques and kicks. Darknuts lose their armor as they take hits, but they grow faster in the process. Their sword skills are quite accomplished. The most fundamental way of dealing with Darknuts is having good command of spin attacks and back slices.

: The Legend of Zelda: Twilight Princess

A Darknut (right) in Smash Run. 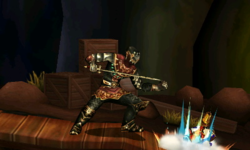 Darknuts appear as enemies. Their design is based on their appearance in Twilight Princess Darknuts attack by swinging their large sword, which does heavy damage and knockback, and their shields are a reflector.

Darknut's armor slows down their speed, but they are highly resistant to flinching. Their armor can be removed by dealing enough damage to them, but their move speed becomes quicker, but their flinching resistance is reduced: weaker attacks barely cause them to flinch, but stronger attacks can interrupt their movements. Also, Darknuts without their armor will respond by throwing their sword before switching to a slightly smaller sword. Defeating them earns the player's fighter large stat bonuses.

These heavily armored, bulky enemies often seen in the Legend of Zelda series are slow but powerful and can use their swords to block attacks and projectiles. When you're faced with one, you'll need to slowly cut away its armor. Once it's gone, the Darknut will become more agile, but it'll also be more vulnerable!

These heavily armoured, bulky enemies often seen in the Legend of Zelda series are slow but powerful, and can use their swords to block attacks and projectiles. When you're faced with one, you'll need to slowly cut away its armour. Once it's gone, the Darknut will become more agile, but it'll also be exposed enough to be beaten.

In the intro cutscene of Adventure Mode: World of Light, Darknut is one of the countless spirits captured by Galeem during his takeover of the universe. After Galeem's defeat, Dharkon takes control of Galeem's spirits, including Darknut. Darknut's spirit is the first spirit located in the northern section of The Dark Realm.

Darknut's Spirit Battle uses a Link puppet fighter and is fought on the Bridge of Eldin stage's battlefield form. During the battle, Link's melee weapon power increases, referencing how Darknuts are powerful swordfighters, while their movement and stats increase when badly damaged, referencing how Darknuts become agile when their armor is removed.