A swarm of Kihunter surrounding Samus in Metroid: Other M.

Kihunters are insectoid enemies introduced as Space Pirates in Super Metroid, where they assisted the Zebesian Space Pirates in rebuilding their base on Zebes. Zero is their larval stage, as revealed in Metroid Fusion. They fly through the air and can harm Samus Aran by spitting acid at her or by attacking with their stingers and claws.

They appear again in Metroid: Other M, the source of their Smash design, where they were cloned and bred for use as biological weapons. They are led by King Kihunter, and they protect their king and hive during its boss battle. 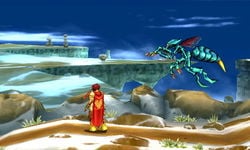 A Kihunter in Smash Run

Kihunters appear as flying enemies. They attack by spitting globs of acid that pierce shields and paralyze players. They may also charge at the player with their stinger. When defeated, they drop Jump stat boosts.

Creatures hailing from the Metroid series. They start off life as a Zero, growing into this bee-like form. Kihunters prefer to attack with quick dashes and by spitting gobs of acid. Definitely dodge the acid—it stuns you and goes through shields. Defeated Kihunters drop Jump stat boosts.

These insectoids from the Metroid series emerge from their larval form known as a Zero. Kihunters attack by either charging at you from above or spitting acid. That acid can paralyse you, and it'll even cut through your shield, so dodge to avoid getting hit. If you defeat a Kihunter, you'll get Jump stat boosts for your troubles.

While Kihunters do not appear as enemies or have their own trophy in this game, several Kihunters are included as part of the King Kihunter trophy to reference their role in its boss battle in Metroid: Other M.

King Kihunter's trophy in Super Smash Bros. for Wii U

Like social insects in real life, Kihunters function as a colony, possessing a hierarchy and assigned roles. The easiest comparison is to bees, which they also closely resemble. This gigantic insect seems to be the leader of the cloned Kihunter colony that appears in Metroid: Other M, similar in status to a bee colony's queen.

Like social insects in real life, Kihunters work as a colony, with a hierarchy and roles to play. Basically, they're like bees. They kind of look like bees too... This gigantic insect seems to be the leader of the cloned Kihunter colony that appears in Metroid: Other M. In bee terms, that would make it the queen.