Kraid (クレイド, Kraid) is a recurring boss in the Metroid series. Kraid is a massive, high-ranked Space Pirate with three eyes and the ability to generate and fire spikes from his stomach and fingers.

Kraid is one of the major antagonists from the Metroid series, making his debut in the first game alongside Ridley and Mother Brain. In his original appearance, Kraid was depicted as a humanoid rhinoceros-like creature, although Super Metroid redesigned him as an enormous reptilian creature, which was retroactively featured in the first game's GBA remake Metroid: Zero Mission.

In Metroid and Zero Mission, Kraid is one of two Space Pirate bosses who must be hunted down and defeated by Samus Aran in order to access Tourian, the final area where Mother Brain and the eponymous Metroids are located. Kraid's lair is located in the depths of Brinstar, and is also home to a false Kraid that is much weaker than the real boss. Unlike Super Smash Bros., Kraid is never fought in an area with lava until Dread, although he is fought in a room with pools of acid on either side of his platform in Metroid. In Zero Mission, defeating Kraid allows Samus to find the Speed Booster. Kraid also appears in the Monthly Magazine Z-published Metroid manga, based on his role in Zero Mission.

In Super Metroid, Kraid plays a similar role as before, now one of four Space Pirate bosses who must be defeated in order to access Tourian. Kraid can be found in a new Space Pirate base in lower Brinstar, where his chamber is guarded by Kihunters, Zebesians, and Mini-Kraid. Kraid rises from a thicket of brambles and thorns to challenge Samus, attacking with his claws and stomach spikes. Upon his demise, Kraid sinks into the ground, clearing the way for Samus to find the Varia Suit.

After 17 years of absence, Kraid returns as the second major boss in Metroid Dread. He has been forcibly restrained by the Mawkin Chozo in Cataris, the geothermal power plant of planet ZDR. Similar to Super Smash Bros., he is fought in a room with a pool of lava, and he strikes Samus's platform with his claw midway through the battle. His means of attack generally remain the same as in previous series, with the addition of new attacks such as fireballs from his mouth and a purple poison attack coming out of his stomach. Upon defeat, Kraid breaks free from his restraints but immediately sinks into the lava, making the way for Samus to find the Diffusion Beam. At the end of Metroid Dread, an X parasite merges with Raven Beak and becomes Raven Beak X, a hybrid of Kraid and Raven Beak, which implies that Kraid had been assimilated by the X after his defeat. Immediately afterward, Raven Beak X is obliterated by Samus's Hyper Beam, likewise eradicating the last remnants of Kraid.

Kraid was planned to appear in Metroid Prime as a boss wearing a metallic helmet to protect his vulnerable head, although this was scrapped due to time restraints. Outside of the Metroid series, Kraid has also appeared as a towering robot animatronic in the "Metroid Blast" attraction of Nintendo Land; much like in Super Smash Bros., this appearance has Kraid emerging from a pool of lava. 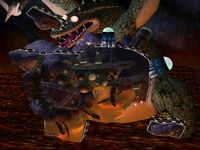 Kraid on Brinstar Depths in Melee.

Kraid is a key factor of the Brinstar Depths stage, which is based on his lair in Metroid. Kraid rises from the lava in the background every fifteen seconds, roars, and then slashes at the stage, which causes it to rotate either clockwise (if Kraid slashes with his right hand) or counterclockwise (if Kraid slashes with his left hand). Since he remains entirely in the background, he cannot directly affect or be hit by the fighters. He also appears as a trophy, unlocked with the Brinstar Depths stage.

Kraid
A boss enemy from Metroid, Kraid lives in the depths of Brinstar. He immobilizes enemies with his three red eyes, and his powerful jaws can crush anything. He can also shoot the three spikes in his belly; it's said he often fires them at his prey. Once Samus defeated Ridley and Kraid, the way to Tourian opened.

Kraid simply appears as a sticker in Super Smash Bros. Brawl, as Brinstar Depths only returns in the form of its music track. 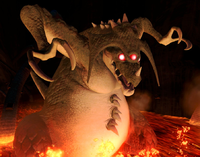 Kraid on Brinstar Depths in Ultimate.

Kraid returns alongside the Brinstar Depths stage, playing the same role as before. His model has been updated with significantly higher detail, bringing him closer to his established canonical appearance in the Metroid series.

Kraid is also a master spirit and is unlocked in Adventure Mode: World of Light, in a stamina battle against a Giant King K. Rool on Brinstar Depths' Ω form. As a master spirit, Kraid cannot normally be equipped by fighters; exclusively during this fight, he is classified as a Neutral type. Once unlocked, Kraid runs a Dojo where he teaches the Tank Style, which increases offense and defense but reduces move speed and jump.

The following is a list of quotes that Kraid can say when a player visits his dojo.