Porygon (ポリゴン, Porygon) is a creature in the Pokémon media franchise. 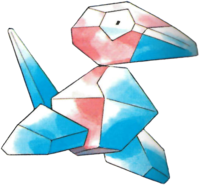 Porygon is a Normal-type Pokémon introduced in Generation I of the Pokémon games, and is categorized within the Pokédex at #137 as the "Virtual Pokémon". In these games, it could only be obtained by purchasing it at the Celadon Game Corner up until Generation IV where it can be found in the wild. In Generation II, it gained an evolution, Porygon2, which it evolves into when traded holding an Upgrade. In Generation IV, it gained yet another evolution, Porygon-Z, which it evolves into when traded holding a Dubious Disc. This makes it the only Pokémon that needs to be traded twice to reach its final evolution.

Tackle is a Normal-type move with with 40 base power and 100% accuracy (35 and 95% before Generation V, 50 and 100% from then until Generation VI) and no added effects. It is a very basic move which consist in a simple charge against a single opponent, and it is part of the starting moveset of many Pokémon, including Porygon, in all games.

Porygon as it appears in Super Smash Bros.

Porygon is one of the five Pokémon which come out of the central building in Saffron City to perform an attack. It lunges out very quickly, dealing 18% damage upon its appearance and 8% damage thereafter. 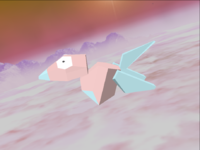 A giant balloon of Porygon (in actuality, the 3D model of Porygon used in Pokémon Stadium for Nintendo 64) is one of the many floating and bending platforms that make up the Poké Floats stage. Three of them come in from the right of the screen, acting as solid hard platforms.

Porygon yet again appears in the Saffron City stage, lunging out of the Silph Co. building similarly to what it did in Smash 64.

Porygon also appears as a spirit.