Weezing (マタドガス, Matadogas) is a Pokémon. It evolves from Koffing. 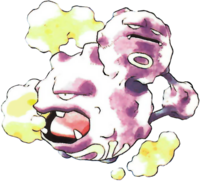 Weezing is a Poison-type Pokémon introduced in Generation I, and is categorized within the Pokédex at #110 as the "Poison Gas Pokémon". It evolves from Koffing at level 35, and like its previous form it uses the gases contained in its body to float, attack and occasionally explode. It is somewhat notable for being Team Rocket member James's partner Pokémon in the early episodes of the Pokémon animated series, having evolved from Koffing in the 31st episode of the original series and remaining with him until early into the Advanced Generation series. Weezing also has a Poison/Fairy-type Galarian regional form in Pokémon Sword and Shield.

Smog is a Poison-type move which Weezing learns at early levels, when it's still a Koffing: while very weak (30 base power, 20 prior to Generation VI) it has a 40% chance of inflicting the Poison status to the target.

Weezing appears in the Classic Mode ending picture for the Ice Climbers. 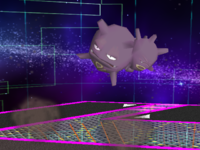 Weezing can appear as a Poké Ball Pokémon, using Smog as its attack, which is nearly identical to Koffing's attack in Super Smash Bros. A cloud of gas will come out of the holes in Weezing. Any character that makes contact with the Smog will take damage and low knockback. If a character is stuck in the center of Weezing's attack, then they will also take damage continuously. Weezing can deal the most damage out of any Pokémon in Melee, being able to deal well over 100% if someone is to stay in the center of it, but a player can simply DI out of Weezing's attack to minimize damage. It is interesting to note that Weezing can deal extreme damage to Giga Bowser, as his very large size keeps him from escaping Weezing once trapped within. It is possible for Giga Bowser to accumulate over 300% from Weezing, making Weezing very valuable in Event 51: The Showdown and in the Giga Bowser battle in Adventure Mode. Weezing's attack does not harm the summoner. 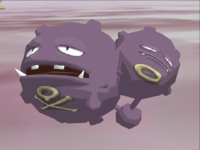 A giant balloon of Weezing (in actuality, the 3D model of Weezing used in Pokémon Stadium for Nintendo 64) is one of the many floating and bending "platforms" that make the Poké Floats stage. The balloon starts out big and actually decreases in size over time, likely referencing its ability to change its body size when releasing gas.

Weezing features as a collectible trophy, unlocked as one of the 100+ trophies that can be collected randomly during normal play, such as in the Trophy Lottery and throughout the various single-player regular matches.

Weezing
The evolved form of Koffing, Weezing is basically a pair of Koffing fused together. They tend to float in the air and emit gas or noxious smoke from the outgrowths that cover their bodies. As strange as it may seem, diluting Weezing emissions as much as possible creates one of the most exquisite perfumes known to man.

Weezing appears as a spirit.