Cresselia (クレセリア, Crecelia) is a creature from the Pokémon series.

Cresselia is a Psychic-type Legendary Pokémon introduced in Generation IV, and is categorized within the Pokédex at #488 as the "Lunar Pokémon". It is associated with the crescent moon, and its Lunar Wing possesses the ability to dispel nightmares, in particular the ones caused by Darkrai.

In Pokémon Diamond and Pearl and Pokémon Platinum, Cresselia can be found on Fullmoon Island; however, when interacted with, it runs away and has to be chased throughout Sinnoh to be battled. In later games, Cresselia is battled as a regular, stationary Legendary Pokémon.

Psycho Cut is a physical Psychic-type move with 70 base power, 100% accuracy and an increased chance of dealing a critical hit. In every game Cresselia appears in, it can learn Psycho Cut by level-up. 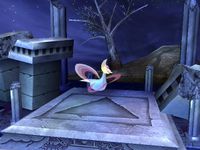 Cresselia on Spear Pillar in Brawl.

Cresselia is one of three Legendary Pokémon that can appear and cause battle effects on the Spear Pillar stage in Brawl, alongside Dialga and Palkia. When the stage is tinted blue, Cresselia may appear instead of Dialga, which uses the same color tint. Cresselia remains stationary like two other Pokémon, occasionally attacking with Psycho Cut after howling. It uses Psycho Cut in two different ways:

Cresselia
A Lunar Pokémon. Cresselia appears on Fullmoon Island and, once discovered, flies around different areas of Sinnoh. Its signature move, Lunar Dance, causes Cresselia to faint but recovers all the HP and cures the status conditions of the next Pokémon its Trainer sends out. Cresselia excels at recovery techniques and is unusual in that it appears only in female form.

Cresselia on Spear Pillar in Ultimate.

Cresselia reprises its role as a stage hazard on the returning Spear Pillar stage. Spear Pillar now allows for any of the three Legendary Pokémon to appear each time, rather than being set for the whole match; however, Cresselia appears much less frequently than Dialga and Palkia. Unlike in Brawl, the stage now has a green color tint when no Pokémon is active, and Cresselia's appearance does not change the color from this default green; in Brawl, Cresselia used the same blue tint as Dialga to signify its appearance.

Cresselia appears as a spirit in Ultimate. It is an Ace-rank primary spirit of the Shield type.

For this battle, Cresselia is the only one of Spear Pillar's three Pokémon that will appear on the stage.