Charmander (ヒトカゲ, Hitokage) is a creature in the Pokémon media franchise. 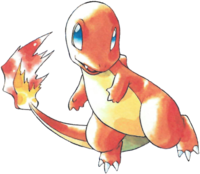 Charmander is the basic Fire-type Starter Pokémon of Generation I, and is categorized within the Pokédex at #004 as the "Lizard Pokémon". It is known for the fire on the tip of its tail, which shows its vitality. It evolves into Charmeleon at level 16, which in turn evolves into Charizard at level 36. 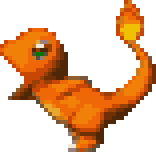 Charmander as it appears in Super Smash Bros.

Charmander is one of the five Pokémon which come out of the central building in Saffron City to perform an attack. It attacks fighters close to it with fire breath that resembles the Ember and Flamethrower attacks, which acts similarly to the effect of the Fire Flower item.

Charmander appears as a randomly collectable trophy, while its final evolution, Charizard, is a playable character as part of the Pokémon Trainer.

Charmander
A Lizard Pokémon. It just downright likes hot stuff. The always-burning tail indicates its mood--waving gently when content and burning intensely when angry. If the tail were to go out, it would be the end of Charmander's life. Its tail is believed to emit steam when it rains. Charmander evolves into Charmeleon by leveling up.

Charmander reprises its role as a stage hazard on Saffron City. Charmander also appears as a spirit.