Raikou (ライコウ, Raikou) is a creature in the Pokémon media franchise. 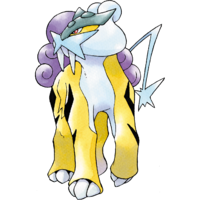 Raikou is an Electric-type Legendary Pokémon introduced in Generation II, and is categorized within the Pokédex at #243 as the "Thunder Pokémon". Along with Entei and Suicune, Raikou is part of a trio commonly referred as the legendary beasts: in Pokémon Gold and Silver and their remakes Pokémon HeartGold and SoulSilver they can be found in the Burned Tower; however, when interacted with, they run away. Raikou can then be found randomly in any route, and will attempt to run away whenever it gets a free turn unless it gets trapped by a move like Mean Look or an ability like Shadow Tag: however, any damage and status conditions received will be retained.

Spark is an Electric-type physical move with 65 base power, 100% accuracy and a 30% chance to inflict the Paralysis status on the target. Raikou can learn it naturally in every game. 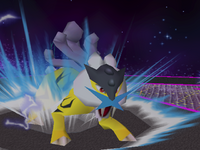 Raikou is treated as a "legendary" Poké Ball Pokémon; its chance of appearing is much rarer than most of the others, and in return its effect is more powerful. Raikou uses Spark as its attack. A current of electricity will form around Raikou. Any character (other than the summoner) that makes contact with the ground within the current of electricity will take 20% damage (up to 180% damage is possible, if all possible hits connect) and be thrown a short distance up into the air, similar to Venusaur's Earthquake, though more powerful and in a much larger area.

Raikou features as a collectible trophy, unlocked as one of the trophies that can be collected randomly in the Trophy Lottery, though it only appears once all characters have been unlocked.

Raikou only appears as a random trophy. It is part of the Legends of Johto Trophy Box.

Raikou's trophy in Super Smash Bros. for Wii U

Was that a bolt of lightning flashing by, on the ground instead of the air? Then it could have been Raikou. A rumble of thunder in the distance, but not a cloud in the sky? Sounds like Raikou's roar to us. It is said that this wild Pokémon perished in the Johto region once, but Ho-Oh was so filled with sorrow at the loss that Raikou was resurrected.

If you see a bolt of lightning flash across the ground instead of from the sky, you may have just caught a glimpse of Raikou. And if you hear a peal of thunder that lasts longer than it should, that may be Raikou's roar. It's said that this wild yet majestic Pokémon once perished in the Johto region, but Ho-Oh, filled with sorrow, resurrected it.

Raikou also appears alongside Entei and Suicune as an Ace-class primary spirit.

Raikou's Spirit Battle uses a Pikachu puppet fighter and is fought on the Suzaku Castle stage. He is fought along the Incineroar and Greninja puppet fighters representing Entei and Suicune respectively. During the battle, the floor is made of lava, referencing how Raikou, Entei, and Suicune were initially three unknown Pokémon who perished at the fire of the Brass Tower.