In Smash 64 and Ultimate, Jigglypuff is fought here for its unlocking battle.

Saffron City has one main platform attached to a small platform above a door. To the right is a narrow platform and to the left are two elevators (moving platforms). Between these and slightly lower than the other platforms is yet another narrow platform. There are many gaps in-between that character and items can fall into. It is this feature, as well as the fact that it is a stage upon the tops of tall buildings, that makes it similar to the Fourside stage in Super Smash Bros. Melee.

Occasionally, the door of the Silph Co. building opens, and if the door has been open for a while or if a character approaches the door when it is open, one of five Pokémon will emerge from it. These Pokémon are:

In Super Smash Bros. Ultimate, the main platform of the Ω form and Battlefield form is reminiscent of the Silph Co. building, with the floor resembling the building's rooftop and the walls resembling the building's facade. It is also the same size and shape as Final Destination and Battlefield, respectively. The design of the three soft platforms in the Battlefield form are based on the moving soft platforms of the regular form without any propellers.

With stage hazards turned off in Ultimate, the door on the Silph Co. building does not open, and so no Pokémon emerge from it. In addition, the hovering platforms on the left remain stationary. 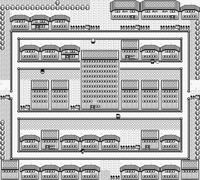 Saffron City as it originally appeared in Pokémon Red and Blue. The Silph Co. building is the large building in the middle.

The main building in Saffron City, Silph Co., is a major producer of items that benefit Pokémon trainers, such as Potions, Repels, Technical Machines, and various Poké Balls. In Pokémon Red and Blue, Team Rocket orchestrates an invasion of Silph Co. to steal their top-secret project, the Master Ball. Upon their defeat, the Saffron Gym becomes accessible. This stage takes place on top of the roof of Silph Co.; however, its design is different than how it originally appears in the Pokémon games. The other buildings, including the ones in the background, do not bear resemblance to any building in Pokémon Red and Blue’s Saffron City. However, they do in fact resemble the taller skyscrapers that are shown to make up the city in the Pokémon anime, meaning that the overall design of Saffron City in Smash was most likely inspired more by the anime than the games.

This stage is commonly banned in both Japanese and American tournaments due to its overly large size promoting excessive camping, and the random Pokémon hazards disrupting gameplay, though the latter is not an issue in Ultimate thanks to the ability to remove stage hazards. Characters such as Ness or Lucas have more difficulty recovering here; it is near impossible to recover using PK Thunder between the buildings should they fall in.