Electrode (マルマイン, Marumine) is a creature in the Pokémon series. 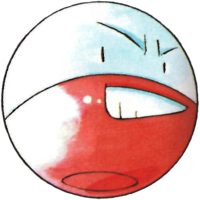 Electrode is an Electric-type Pokémon introduced in Generation I, and is categorized within the Pokédex at #101 as the "Ball Pokémon". It evolves from Voltorb starting at level 30, and, like it, it sometimes disguises itself as a Poké Ball and attacks unwary trainers which try to pick it up. Electrode received an Electric/Grass type Hisuian form in Generation VIII.

Explosion is a Normal-type move introduced in Generation I. With 250 base power it is in normal conditions the most powerful attack in the series, but has the severe drawback of making its user faint. Electrode can learn it in every game.

Electrode made its debut to the Smash series in Super Smash Bros., appearing as one of five Pokémon hazards on the stage Saffron City. The Electrode in Saffron City will pop out from the door on the side of the building when a character approaches. Electrode then will use Explosion as its attack after a few seconds of its appearance. Any character that is caught in the blast radius of Electrode will take 30% damage and massive knockback (KOing around 45%). 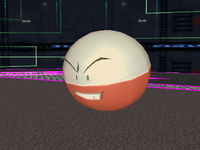 Electrode returns in Super Smash Bros. Melee, this time as a Poké Ball summon, using Explosion once again. When Electrode comes out of the Poké Ball, it remains still, but will start to get darker over a period of a few seconds: this serves as a warning that Electrode is about to explode. When Electrode explodes, everyone in the blast radius (including the character who summoned Electrode) will take heavy damage that is almost equal to a Bob-omb, and can KO characters even at low percentages (around 30% on Mario). When Electrode is about to explode and starts to spark it can be picked up and thrown. The character holding Electrode must be fast when disposing it, as their throwing animation has more startup lag, making characters with larger throw delays (such as Marth and Bowser) have a smaller window of safety. Electrode also appears in the event match Bomb-fest as the only Poké Ball Pokémon.

Electrode features as a collectible trophy, unlocked as one of the trophies that can be collected randomly throughout the various Single-player Regular Matches. Electrode keeps its Melee function. However, this time there is a chance that it will fail to explode, only to resume its detonation a couple seconds later. It can be picked up in its defused state just like it can right before exploding, giving the holder a longer time to throw it. When a thrown Electrode collides with the ground or another player it explodes, and when smash thrown it can OHKO nearly any character but the super-heavyweights (Bowser, Donkey Kong, Snake, and King Dedede). Occasionally it just appears to fail, only to explode a few seconds later.

Electrode
A Ball Pokémon. The more electricity it stores in its body, the quicker it moves. One danger of storing that much electricity is that the slightest stimulus may cause it to explode. Moves it specializes in include Selfdestruct and Explosion. Its love of electricity often causes it to gather in groups near power plants.

Electrode in Super Smash Bros. for Wii U.

Electrode returns in Super Smash Bros. 4, reprising its role from Brawl and functioning in almost the exact same way. It is also the only Poké Ball Pokémon who is able to OHKO (when smash thrown).

Electrode's trophy can be randomly obtained in both versions. In Super Smash Bros. for Wii U it is part of the Pokémon Trophy Box.

Electrode's trophy in Super Smash Bros. for Wii U

An Electric-type Pokémon that stores energy inside its body. Nicknamed "the Bomb Ball" by some, the slightest shock risks setting this Pokémon off. If you're feeling brave, you can throw Electrode at your foes before it detonates. Handle with care, or it'll go off in your hands instead!

This Electric-type Pokémon stores huge amounts of electricity in its body. It is also known as the Bomb Ball due to the fact that even the lightest touch can make it blow up. Sometimes it takes a little while for Electrode to use its Explosion attack, so you might have enough time to throw it in someone else's direction! Feeling brave?

Electrode as it appears in Super Smash Bros. Ultimate.

Electrode returns as a Poké Ball summon, with the same mechanic of the previous game, but with one significant change. The explosion now ignores weight, making the victims' falling speed the main determining factor in their survivability. It is still the only Poké Ball Pokémon able to OHKO (when smash thrown).

Unlike previous installments, Electrode now sports an angry expression instead of smiling.

Electrode reprises its role as a stage hazard on the returning Saffron City stage. While it uses a 3D model for its Poké Ball role, the Electrode on Saffron City uses a 2D sprite as in the original Super Smash Bros.