From SmashWiki, the Super Smash Bros. wiki
(Redirected from Stamina battle)
Jump to navigationJump to search 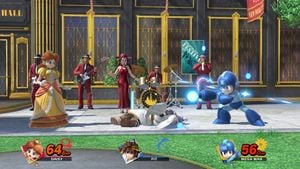 For the stat held by the Pokémon Trainer's Pokémon, see Pokémon Change. For the actual stat held by characters in this mode, see Hit Points.

Stamina is a gameplay option that replaces the traditional Super Smash Bros. damage percentage with a "HP gauge" similar to the life bars of conventional fighting games, which must be depleted to defeat characters. Stamina was a Special mode option prior to Super Smash Bros. Ultimate, where it became a standard rule option. Battles with Stamina rules also appear in some event matches, one possible Smash Run Final Battle, and some spirit battles.

In Stamina, every hit to the player depletes some HP from them. Once a character reaches 0 HP, they are KO'd, though characters can still be knocked off the stage through conventional means. However, knockback is not affected by the amount of damage the player has taken. From Melee to SSB4, characters in Stamina only have a single life, but in Ultimate, the mode can be used with stocks; when a character reaches 0 HP, they will be instantly KO'd and respawn for as long as they have stocks remaining. When a character is defeated, the game will temporarily slow down, and the character will let out one of their KO cries, which varies based on the game. If the victim is hit by a very weak attack when they are KO'd (or defeated by a damage-over-time status effect like flower), they will perform a unique animation of them dramatically crumpling to the ground, usually falling backward or on their knees; otherwise, they will simply begin tumbling outside of player control, entering their prone state when landing on solid ground.

Defeated fighters will always stay in their prone position and flash red; they cannot be controlled by the user and will always enter a state of tumbling when hit, and can be knocked off the stage and KO'd with a blast KO as usual. In SSB4, defeated characters can also be eliminated completely if the victim is trapped in certain hazards such as Danger Zones. Any helper characters, such as Pikmin, will still stay next to the knocked-out combatant, with the exception of Luma, who will be KO'd alongside Rosalina, and the partner Ice Climber in Ultimate, who will be KO'd alongside the leader. In Ultimate, defeated fighters will explode after a brief moment, removing them from the battlefield.

Healing items and moves cannot heal a fighter's HP past their starting amount.

In knockback calculations, the opponent's post-hit percent is treated as 20%.

Stamina mode was first introduced in Melee as a Special Melee option. Unlike future games, the HP of every fighter is fixed to 150 HP. There is no legitimate way the player can edit the starting stamina, barring use of an Action Replay to modify flags in the match's data; the instruction booklet, however, shows a screenshot of Stamina Mode with HP higher than 150, suggesting that selectable Hit Points was previously considered.

Melee's version of Stamina is unusual for not having a results screen, as it will send players directly to the character selection screen once a single player remains. This makes it the only mode in all of Melee with such property; as a result, players can use the name entry glitch to use Master Hand in the mode without causing the game to crash if he wins a match.

Characters who have 0 HP remaining in Melee's Stamina mode will let out their Star KO cry. Unlike other rules, there is a noticeable pause after the final opponent being defeated, before the announcer calls out "Game!"/"Game Set!".

Brawl once again offers Stamina mode in the game's Special Smash mode, Special Brawl. Players can now select their starting HP individually via the Handicap option, allowing increments of 10 between 10 HP and 300 HP, as well as only 1 HP. Brawl's 1HP setting allows for lightning-quick games with no legitimate winner if all players also have the flower status on them: all fighters will be KO'd at the same time, forcing the game to select a random winner.[1]

The addition of Final Smashes affect the bodies of fighters KO'd by one: if the victim is trapped in a "trapping" Final Smash such as Ike's Great Aether or Link's Triforce Slash, the character will be "dropped out" from the move once their health is depleted.

Characters who have 0 HP remaining in Brawl's Stamina mode will let out their Star KO cry, with an additional echo effect added to it. Additionally, the announcer now calls out "Game!"/"Game Set!" as soon as the final victim is defeated, overlapping their KO cry.

In Super Smash Bros. for Wii U, Stamina returns as a Special Smash option, but the 1 HP option is removed, meaning the HP range is now 10-300HP.

Unlike the other games, characters who have 0 HP remaining in Smash 4's Stamina mode stay completely silent when knocked out, although the slowdown effect still occurs. There is once again a noticeable pause after the final opponent being defeated, before the announcer calls out "Game!"/"Game Set!", though not as long as in Melee.

In Ultimate, Stamina is now available as a standard rule option which can be combined with Time and Stock modes. As Stamina mode is no longer a part of Special Smash, it is now possible to play Stamina battles with a maximum of eight players. The maximum HP possible has been drastically increased, as players can now have HP ranging from 10-999 HP.

When playing with more than one stock or during a timed match, losing all HP causes an instant KO and respawn; on the fighter's final stock, KO'd characters will enter their motionless defeated pose, and will eventually explode after a few seconds (instead of permanently staying on-screen unless knocked off, like in previous games). As with other default modes, the final blow will feature the "Final Zoom" effect regardless of how strong the move was unless the KO was a Blast KO; if such, the game just ends like a normal match. If the character dies by a blast zone, then there is a slight delay before the match ending, likely because of the delay present when a character reaches 0 HP. Randomly the announcer may say game at the same time a last character is KO'd on their last stock and the results screen plays during the final zoom.

In Ultimate, victims caught in a trapping or cinematic (e.g. Chain Attack, Max Malicious Moonsault, The Mighty Jinjonator) Final Smash will not go below 0.1 HP until the final hit. However, a few of these Final Smashes do not have this ability (such as Isabelle's Dream Town Hall or Luigi's Poltergust G-00), and opponents that attack a trapped foe in a non-cutscene Final Smash will still KO the victim before the move ends. Additionally, Final Smashes that previously had extremely high or OHKO potential (such as Critical Hit) have their knockback significantly reduced to prevent them from KOing opponents with high HP, unlike in Brawl or Smash 4.

Characters who are out of HP and have lost all of their lives in Ultimate's Stamina mode will let out an echoed version of their primary Blast KO cries. As a result:

There are a few exceptions:

Some team characters appear to be inconsistent:

If a character lost their final stock by conditions that are capable of instantly KOing them under normal circumstances (e.g. Triforce of Wisdom, Whack, Thwack, Danger Zones, Death's Scythe and Mimikyu), their knockout voice clip will be heard, but the instant KO explosion occurs without entering the defeated animation, like normal rule.

A comparison between a blast KO voice clip (known as Missfoot internally)...
...and its Stamina counterpart (known as Knockout) in Ultimate; in this case, Zelda.