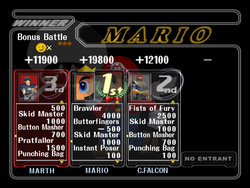 A result from a Bonus match in Melee.

Bonus, referred to as decision in the debug menu and by the Announcer, is a type of Versus mode match in which the winner is determined by the amount of points they have obtained via bonuses. It only appears in Super Smash Bros. Melee; it does not return in subsequent games due to their lack of Bonuses, making it the only versus mode unique to Melee.

In general, gameplay can be treated somewhat similar as a Time match, as there are bonuses for KOs (which adds points) and being KO'd (which subtracts points), and the match ends when time runs out. However there are several bonuses that players may choose to pursue instead of fighting normally based on their value, difficulty, and risk:

If there is a tie when time runs out, Sudden Death occurs. Bonuses earned in Sudden Death do not apply to the final scores; whoever wins Sudden Death wins the match.