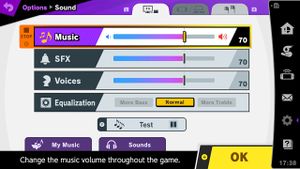 Sound is a mode typically found in the option menu in every game in the Super Smash Bros. series. While its function varies slightly from game to game, its basic purpose is to adjust the audio and soundscape to the preference of the player.

In Super Smash Bros., the Sound option is found in the Options menu. It allows the player to either set the game to Monaural or Stereo sound.

In Super Smash Bros. Melee, the monaural and stereo option stayed. A new option, however, adds a music and sound effects slider; depending on which way the slider is set, the game will either make the sound effects or music louder, and setting the slide all the way to either side will mute the opposing sounds.

The Sound options page in Super Smash Bros. Brawl has the slider mechanism from Melee, but the monaural and stereo option has been removed, as these settings are instead modified in the Wii's internal options. Additionally, a link to the Sound test is added.

In Smash 4, the Sound options menu returns, but is revamped from its previous incarnation. The slider for sound effects and music has been removed, and instead, Music, Sound Effects, and Voices have three separate sliders, allowing the player to decide how loud they wish each option to be, tested by "Battlefield", the Mario coin sound used in Mario's Super Jump Punch, and Mario's voice clips respectively. A button can also send players to the Sound Test. Once again, the player is unable to decide on the output configuration of sound, as such settings are determined by the Nintendo 3DS' and Wii U's settings - and in the Wii U's case, the GamePad's sound has no settings options.

In Ultimate, the Sound options menu is functionally similar to that of Smash 4, with the addition of an equalization option. The sample sound effects and voice clips are now taken from three randomly selected characters out of the eight starter characters plus Ness and Captain Falcon, playing continuously as if the characters were in battle. Individual sound preferences can also be saved for playing on a TV, handheld/tabletop mode, or when headphones are plugged into the Nintendo Switch, each of which the game will automatically use when needed.