From SmashWiki, the Super Smash Bros. wiki
(Redirected from Century Smash)
Jump to navigationJump to search 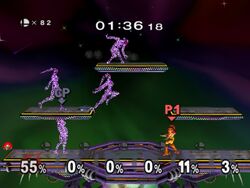 Items spawn periodically to help the player defeat the opponents. In Melee and Brawl, these items and their appearances are random; in SSB4 and Ultimate, the items appear on an extra moving platform and have a fixed sequence (in SSB4: Pow Block, Ray Gun, Smart Bomb, Pow Block, Killer Eye, Smart Bomb; in Ultimate: Pow Block, X Bomb, Fire Bar, Smart Bomb, Rage Blaster), but different intervals of appearance (SSB4 has the items brought into the screen every 30 seconds; the time interval is more randomized in Ultimate)

A certain level of difficulty is programmed into four different checkpoints of 100-Man mode. After beating a certain amount of opponents, their behavior will change and they will gradually become more difficult. The rate at which the opponents are spawned will also increase. These checkpoints are shown by either a short pause in the spawning of opponents, or by a spike in the number spawned. The opponents' heightened knockback modifiers remain consistent at all stages of difficulty.

At the beginning of the match, two to three opponents spawn and they will gradually increase to between four and five. However, they are at a very low level, that of a level 1 Computer Player. There will be a short pause after defeating the first 25.

After 25 opponents are defeated, the amount at which they spawn will reset, but will gradually increase again. They are aggressive and slightly more dangerous than the first 25 foes.

After 50 opponents are defeated, the amount at which they spawn will reach a maximum of between four and five. Most will constantly approach the player, while some may spread out among the stage. This checkpoint is where most players begin to encounter challenges. In Smash 4, the fiftieth foe will be in giant form.

At some point after 90 opponents are defeated, there will be a small pause during the last few foes to acknowledge that the match is nearing its end. Nevertheless, the last few opponents will shield, dodge, and use smash attacks much more often.

Right before the final challenger, there is one last pause. After the short pause following the defeat of 99 opponents, the final foe will spawn. It is much heavier than any of the previous foes, and as a result, is slightly harder to defeat. In Brawl, the last foe is the player's character (always player one if playing co-op). In Smash 4, the last foe will additionally be in giant form. In Ultimate, the last foe will instead be in normal size form. 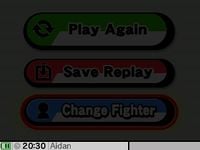 The "Change Fighter" option, appearing in the last few frames where it would normally say "Quit".