For other pages with the name Blade, see Blade (disambiguation).

Roy and Chrom's Double-Edge Dance is a variant of this attack, which also shares the same Japanese, Chinese and Korean name.

When used, the user performs a sideways slash, which can be followed by up to three more hits with further presses of the special button. Tilting the control stick in a specific direction during the execution of any slash but the first changes its trajectory and properties: the second hit can be tilted forward or up, while the third and fourth hit can be tilted up, forward or down. Counting all hits, there is a total of 18 possible combinations. 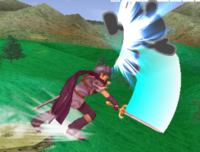 In Melee, the first attack is often used to gain horizontal recovery. Also, Marth will glow a color as he uses his attacks. For the first attack, he will glow red; the second, green; the third, blue; and for the last one, red again. It is quite unlikely that Marth would have to use all four attacks, since both the third and fourth strikes have much higher knockback than the first and second. It is rather difficult to pull off the full attack, as the attack requires timing on each blow to follow up. 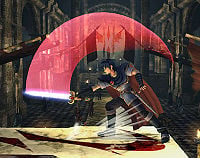 Dancing Blade has seen quite a few changes since Melee. Unlike in Melee, Marth doesn't glow anymore when using this attack: the attacks simply change the motion trail of his sword. The colors are more coordinated, with Red always representing neutral, Blue always representing up, and Green always representing down. Secondly, the timing no longer matters, so it can be performed easily. If the first hit connects, it is nearly impossible to escape the rest of the combo when the timing is fast enough. The knockback on the third strike is decreased, allowing for better combos. The final can either be 2 KO moves at high percentages (Up can KO at 118% tipped, 142% base. Forward can KO at 140% tipped, 179% base) or a quick damage racker (Down can KO at 213% tipped, 305% base), while the upward final strike has a brand new animation (a turning upward flick as opposed to a turning slam-slash in Melee).

The third hit is still a meteor smash, but only if not sweetspotted. However, the move aids Marth's recovery less than the previous game. The damages for the first hit is 3% (4% tipped), both the second hits are also 3% (4% tipped), all the third hits are 4% (5% tipped) and the last up and forward hits are both 6% (8% tipped) while the total of the multiple down hits are 11% (13% tipped).

In Brawl, Marth's Dancing Blade can be reversed by tapping the control stick in the opposite direction a few frames after the side special move has been activated. There is no increase to damage, knockback and has no reverse animation, which makes reversing useful only if it is used to attack behind Marth. However, since Dancing Blade is so quick, it looks like there is a slight animation of Marth turning around, though it is actually the start of the animation of a normal Dancing Blade that continues on the other side when Marth turns around.

Dancing Blade returns in Super Smash Bros. 4 as Marth's side special move, as well as that of his clone, Lucina. Visually, the tip of the sword in Marth's version glows more brightly than the rest of the trail, while Lucina's is a full bright white blur all along her blade, indicating the move's consistent damage across the entire blade (much like most of her other sword attacks). The attack generally deals more damage when angled downward, but has more ending lag, and the downward-angled third hit no longer meteor smashes. Additionally, it is much easier to escape out of, due to the move's lowered hitstun, less interruptibility, and its tendency to throw opponents out of the move even if the first hit connects. Overall, the move is now less effective than in Brawl, although the changes to the move's knockback angles in the 1.1.3 update made the attack easier to chain together, making it more effective than how it was initially.

Dancing Blade returns in Super Smash Bros. Ultimate as Marth and Lucina's side special move, and has again received some significant changes. Each swing transitions significantly faster than before and can thus be buffered, making the move easier to connect with every hit. Every swing has an altered animation. However, the user does not step forward as much after each swing, reducing the move's effective range, and the first swing has slightly longer startup.

Dancing Blade loosely resembles the Astra skill, which allows its users to unleash five consecutive blows upon an enemy when activated. Originally simply allowing for five strikes with no drawbacks, it has received various nerfs throughout the series, such as reduced damage per blow, removing the ability to land a critical hit, and removing the ability to make a follow-up attack. Despite this, Astra is commonly seen as one of the most powerful offensive skills in the series.

Astra does not exist in any of Marth's four native games, as the skill system debuted in Fire Emblem: Genealogy of the Holy War after Marth's original two games and was not included in the Nintendo DS remakes, though the skill itself was introduced prior to Melee. Despite this, Marth's "King Marth" bonus unit incarnation in Fire Emblem Awakening possesses Astra as a default skill, likely as a reference to Smash. Lucina is also able to obtain Astra through reclassing if her mother is a female Avatar, Sully, or Olivia. In their default classes in Awakening, Lord and Lodestar respectively, Lucina and Marth's motions while using it are a strong visual parallel to the Dancing Blade motions in the Smash Bros. series. Any character in Awakening can also use Astra if the bow of the same name is equipped. In Fates, Lucina and Marth use similar motions to Dancing Blade in their regular attack animations.

The English version of Fire Emblem Fates went on to give the amiibo incarnation of Marth and his Lodestar class a skill named Dancing Blade after the Super Smash Bros. move. The French, Italian, and Spanish translations also made this reference. However, this was likely not originally intended to be a direct reference, as it has a different Japanese name ("Gentle Blade") and an unrelated effect, granting the user +3 to their Speed stat but -1 to their Defense stat. The skill's English name would later be changed to Flashing Blade in Fire Emblem Heroes alongside the other languages, accelerating cooldown for special skills by 1 point per attack if the user is faster.