It is a variation of Marth's Dancing Blade (with which it shares its Japanese, Chinese and Korean name), and has the same general behavior; however, one major difference as a result of the user's faster falling speed is that it does not stall the user in the air as effectively. Another major difference is that Roy's Double-Edge Dance has a fire effect on the last hit (in Melee, this also applies to the third hit when inputted downwards). 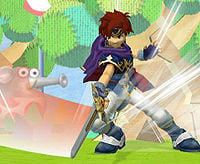 This move is integral to Roy's metagame due to its range, speed, and KO potential. It is particularly effective for approaching, as the first hit can lead into a down tilt, grab, or the subsequent hits of the attack.

The first two hits of the four-hit combo are relatively weak and easily crouch canceled by opponents, but they will come out no matter how quickly they are inputted. For the third and fourth hits, the player must wait a few frames between inputs, or else the attacks will not come out. The tradeoff for the difficulty in inputting the later hits is significantly higher knockback, which can knock over opponents trying to crouch cancel.

The third hit of the combination inputted upward has a meteor smash hitbox, producing a slightly diagonal trajectory if the sourspot does not hit. On grounded opponents, it will knock them into the air and set up for the fourth hit. Inputted forward, the third hit deals excellent knockback and can be used as a KO move at higher percentages. The third hit inputted downward produces a flame effect and can knock over opponents trying to crouch cancel. Unusually, while the third hit forwards has higher base knockback, its growth is actually smaller than Dancing Blade's version, meaning it is overall less powerful at higher percentages, while also being harder to link the fourth hit together with the third hit at lower percentages.

With the exception of the downward input, the final hits of DED deal the most knockback compared to the other hits. The upward input has high vertical range and high knockback. The down input actually deals multiple hits, and while it deals little knockback, its long range and duration make it effective for shield stabbing and knocking down opponents attempting to crouch cancel. Compared to the other inputs, the forward one is lackluster, and rarely used.

Double-Edge Dance returns in SSB4, where it has been updated to use Marth's Dancing Blade animations from Brawl and SSB4, making it one of Roy's only attacks that has not gained an animation distinct from Marth. Its many attacks have gained different attributes when compared to Melee, making its hits essentially the same as Marth's version.

Some of the unique attributes of Double-Edge Dance have now been removed: the third hit no longer acts as a flame-infused strong hit, and now chains into the fourth hit, which acts as the finisher. Additionally, all angles of the first three swings now connect into the ending hit. Like Dancing Blade, it is now an integral move for damage-racking, catching landings and shield-pressuring when the opponent is close.

As Roy shares Marth's technical changes from Melee to SSB4, Double-Edge Dance now requires less technical precision to input in a row which makes the attack easier to combo, but suffers from similar issues with connecting together at higher percentages.

As with Dancing Blade in Brawl and SSB4, the first hit stalls Roy's movement in the air for a few frames, although unlike the aforementioned move, it does not make Roy lose his momentum as much, due to his faster falling speed. This makes this unusable for recovery in comparison to Marth's when combined with his aforementioned falling speed, but makes it a better approaching air-to-ground attack.

Double-Edge Dance returns as Roy's side special move in Ultimate. Much like in SSB4, Double-Edge Dance has received many of the same adjustments as Marth's Dancing Blade: each swing transitions significantly faster and can be buffered, and all hits have altered animations. Most infamously of all, however, the final neutral hit of Roy's Double-Edge Dance deals noticeably more knockback when sweetspotted, improving its already-impressive KO potential. On the other hand, the first swing has higher startup, making it easier to predict.

As Roy's Echo Fighter, the basic properties of Chrom's Double-Edge-Dance are identical, including its frame data and aerial stalling ability. However, as Chrom's Falchion lacks a sweetspot and sourspot, his version of Double-Edge Dance deals consistent damage and knockback. While the fourth forward swing of Chrom's move deals much more damage and knockback than Roy's sourspotted move, it still deals considerably less knockback than Roy's sweetspotted variant, hindering its KO potential compared to Roy's. All three variations of the final hit also lack flame properties as well. Because of these differences, his version is much closer in appearance and function to Lucina's Dancing Blade, but is slightly stronger than hers.

Like the other DLC characters, Roy lacks custom move variations.

Double-Edge Dance, like Dancing Blade, resembles the Astra skill introduced in the Fire Emblem: Genealogy of the Holy War, which allows its users to unleash five consecutive blows upon an enemy when activated.

While Astra does re-occur in some later games, it does not exist in Roy's home game, Fire Emblem: The Binding Blade. Roy would later gain natural access to Astra in Fire Emblem Heroes in August 2017, under his "Brave Lion" alt. This was released after the "Choose your Legends" voting event, where Roy placed 5th, the second-placing male character behind Ike. It can be upgraded into Galeforce for 500 SP. Although Astra is a skill in Fire Emblem Awakening, Chrom cannot learn it because the skill is exclusive to the Swordmaster class in that game, which Chrom does not have access to. While Chrom has not directly received Astra in Fire Emblem Heroes, it can be accessed via the "Inherit Skill" feature, introduced in March 2017.