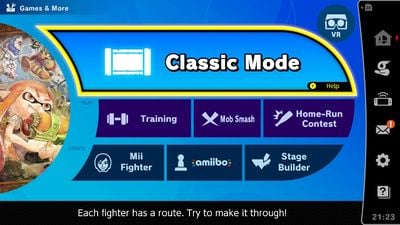 Classic Mode is a mode that can be played with 1 to 2 players. The player travels through various stages and defeats their opponents to advance. On the final stage the player fights a boss.

Training Mode allows the player to practice their fighting skills against an opponent without the general restrictions of Vs. Mode, as well as experiment with different mechanics. It shows the player the combo and damage counter. The player can decide the opponents' behavior and the number of them. They are also given other miscellaneous options such as the option to spawn any items and toggle the speed of the battle.

Stage Builder allows the player to create their own stages from scratch. They can choose the background and any music track from the game. Stages can be built by drawing the terrain on the Wii U gamepad (in Super Smash Bros. for Wii U) or Switch's touch screen or using a controller (in Super Smash Bros. Ultimate). They are also given other parts with various effects such as springs or cannons.

amiibo allows the player to customize their figure players in various ways, such as giving them equipment or customizing their special moves (in SSB4) or giving them Spirits (in SSBU).

The player must defeat as many opponents as they can to claim rewards. They are given different settings ranging from facing 10 fighters to 100, a 3-minute mode, an endless mode, and the significantly-harder Cruel Smash. Unique to Smash 4 is Rival Smash, where one player must defeat more opponents than an AI copy of their character before they are themselves defeated in an otherwise endless match. In Ultimate this mode is a standalone mode instead of a Stadium mode, as Home-Run Contest (at the time of the game's release) and Target Blast not returning to the game, with the new mode All-Star Smash, where the player faces the entire roster, serving as the replacement for All-Star Mode.

Home-Run Contest can be played with either 1 or 2 players. In this mode the player must hit the Sandbag as far as they can. They are given 10 seconds to deal a high amount damage to it, and finishing with the Home-Run Bat or another powerful move. After being initially absent in Ultimate, the mode was reintroduced in the version 5.0.0 update as a standalone mode. 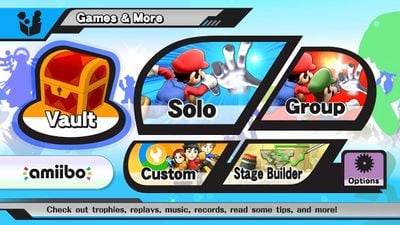 The Games & More menu in Super Smash Bros. for Wii U.

The Vault is a menu that features many of the collection and record-keeping elements of the game, it contains the Trophies, Album, Replays, Records, Sound Test and Tips.

In Ultimate, the Vault is now a separated sub-menu, and is instead found in the main menu, much like in Super Smash Bros. Brawl.

All-Star Mode is a mode where the player must fight the entire roster in the game across several different stages. In between battles they are in a rest area where they are given the option to heal their damage using various recovery items, they can also see their next opponents. In Super Smash Bros. for Nintendo 3DS they fight each player in the order they debuted in their series, whereas in Super Smash Bros. for Wii U this is reversed.

Event Match contains a series of battles where 1 to 2 players must fight opponents under set conditions. Outside of All-Star battles, the players are pre-asigned with a fighter to use for the event.

In Ultimate, the Options menu is instead found in the Dashboard.

Special Orders is a mode exclusive to Super Smash Bros. for Wii U that contains two modes, Master Orders and Crazy Orders, each containing challenges set by Master Hand and Crazy Hand respectively. In Master Orders players must complete one of three orders presented to get a prize. Master Orders range in difficulty, and the cost to attempt the order and the prize earned for completing the order is dependent on its difficulty level. In Crazy Orders, rather than having one single order, the player attempts a series of orders until they either lose or claim victory. The player must either spend 5000G or use a Crazy Orders pass to participate. On the final battle the player is pit against Crazy Hand and, if completed enough battles, Master Hand will also join.

Target Blast is a Stadium mode exclusive to Smash 4, effectively replacing Target Test from previous games. The player is tasked with inflicting damage to a bomb on a platform, then launching it into a structure composed of various blocks filled with Targets, with the goal of destroying as many targets as possible in two rounds.

This allows the player to rematch against unlockable characters they have lost to recently, either from a Versus Mode match or completing Classic Mode, giving another chance for unlocking a character.

Introduced in the version 3.1.0, this allows players to spectate and play single-player matches using the Nintendo Labo VR Goggles.