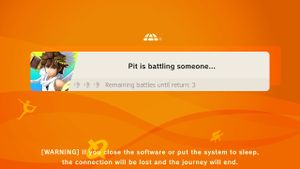 A Pit amiibo after being sent on a journey.

amiibo Journey (called Send on a Journey in the amiibo menu) is a mode in Super Smash Bros. Ultimate added in version 3.1.0 in which a Figure Player can be sent on a journey via the Internet to fight against other amiibo. Three battles take place in one journey. In each of these battles, up to 3 other training partners can be fought at once. As usual, they will be able to gain experience. Once the amiibo returns, it will level by the amount of experience it gained and give the player gifts it earned from battling. The amiibo cannot be watched fighting when in a battle, but a replay can be seen after the battle is finished. However, the replays cannot be saved. Players can only send one amiibo on a journey every 20 hours. The amiibo will not be placed against amiibo of similar levels.

After sending the amiibo on the journey, the game and Switch cannot be used for the duration of the experience, which can take as long as 3 hours. This period of time is counted as play time in the stats menu and on tracking sites like the Nintendo Switch Parental Controls app. The console must remain turned on with a persistant internet connection for the journey to complete. If the power is turned off, the system goes into auto-sleep, or the connection drops at any point, the journey will end prematurely. Due to its long duration, inability to use the console during this downtime, and the reward generally considered not worth the effort, most players prefer training their amiibo themselves as opposed to using amiibo Journey. However, four notices can be unlocked in the Journey.