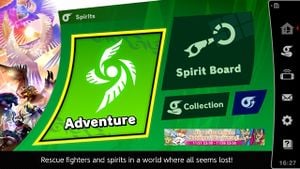 The menu contents. Options for "Adventure Mode", "Spirit Board", "DLC Spirits", and "Collection" can be seen along with an event for the Spirit Board. The Adventure Mode tagline at the bottom reads "Rescue fighters and spirits in a world where all seems lost."

This article is about the menu. For the equippable characters, see Spirit.

Adventure Mode: World of Light is the single player campaign of the Spirits menu. There are three save slots and the player can chose the difficulty between Very Easy (added via a patch), Easy, Normal and Hard. After an opening scene telling how it all started, the player first controls Kirby to travel among the World of Light and obtain as many fighters as possible and spirits via Spirit Battles. They are also tasked in defeating Galeem and to do so, Giga Bowser, Galleom, and Rathalos must be fought to destroy his shield and then win a battle against Master Hand. After defeating Galeem, Dharkon arrives from a crack in the sky and rivals Galeem. The fighters are now transported to the Dark Realm from a void and achieve the same goal against Galeem, defeat Dharkon. Once done, the rivalry against Galeem and Dharkon finally coming to an end, called The Final Battle. After rescuing the last fighters, the player must now fight Dharkon only, fight Galeem only, or fight both at once after making their way through a long final stage. Respectively, only defeating one of them will grant a bad ending showing them consuming the entire universe in their ways while defeating them both features them falling lifelessly into the ocean and then exploding, finally freeing the spirits to return to their original world.

DLC Spirits is a sub-menu that was added in the version 3.0.0 update on April 17th, 2019. It houses Spirit Battles from DLC universes, there will be a list of DLC universes to choose from, and any universes that are yet to be released will be marked with a "COMING SOON" label. It is similar to the Spirit Board with a few differences: the Spirit Battles are up indefinitely, there can be multiple pages on the DLC board, and the spirits will be obtained without needing to shoot the Puppet Fighter. Once the player has defeated all the spirits in a particular DLC board, they will be rewarded with 10,000 Gold.

Collection is a sub-menu that leads to other modes within the menu such as Team Setup in which the player is able to create a Spirit Team and save it with a name. Other modes include Level Up where the player can feed their obtained primary spirits with snacks or cores to increase their level or enhance them if labelled with "Can be Enhanced at Lvl. 99." Dismiss is where the player can send spirits back to their original world and obtain their cores and sell them, feed it to a primary spirit, or to summon other spirits. Summon is where the player can summon another spirit but only if they have sufficient cores needed to summon said spirit. Inventory contains two modes, Spirit List to view spirit images and its series and Items to sell Spirit Board items and cores obtained from spirits.

The main menu in the August 8, 2018 Nintendo Direct