From SmashWiki, the Super Smash Bros. wiki
(Redirected from Trophy Hoard)
Jump to navigationJump to search

For the Brawl mode called "Collection" in Japanese, see Vault.

Collection, referred to as the Trophy Hoard in Brawl and the Hoard in Smash 4, is a mode present in the games that allows the player to view all of the trophies they have collected up to that point. Differences between the three versions exist, but they all have the same overall purpose in the game. 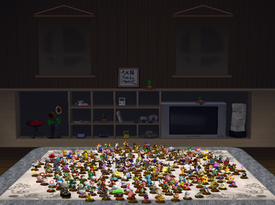 The "Collection" in Super Smash Bros. Melee. This version is from the Japanese version.

As stated earlier, the mode allows the player to view all of their trophies in the game at that point; the player can zoom in and out on the trophies by using the X and Y buttons respectively, as well as pan the camera using the Control Stick; pressing A returns the camera to its original position.

The room that the trophies are showcased in is similar to that of an ordinary bedroom, with a hardwood floor and two window shades, each of which has the Super Smash Bros. logo on them; the trophies rest on a marble table with what appears to be a paper or cloth covering with a grid on it. The table itself resides in front of a multitude of shelves that feature many Nintendo consoles up to the release of Melee; these are visible when zooming out after the player has attained a larger number of trophies.

The consoles that appear in the background are dependent on what version is being played:

Along with the consoles, the Japanese version also features calligraphy on the very top of the shelves, spelling out the Japanese name for the series, "Dairantō Sumasshu Burazāzu" in hiragana, katakana and kanji characters; as calligraphy is not widespread in American or PAL regions, this image is replaced by that of a Mondrian-esque picture with the words "Super Smash Bros." 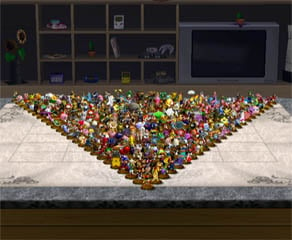 Through the use of inputs, players can arrange the trophies in different, neater arrangements.

The layout of the trophies is completely random, with spaces frequently appearing between them. The player, however, can hold the L, R, or Z buttons to allow for different and neater arrangements; the combinations can give either a rectangle, a circle or a triangle.

The Collection makes a brief appearance at the end of all the Single Player modes as well. Upon clearing the final stage, a cutscene shows the player's character falling in a tumbling state, then turning into a trophy and finally landing on a surface shrouded with shadows; the camera then pans out, showing the trophy on the table, along with any other character trophies the player has attained in the background.

Of note is that after completing any of the single-player games, there are six differently coloured Game Boy Colors in the corner of the shelves; they disappear in the Collection mode.

Another mode, exclusively for debugging purposes allows for selecting trophies using the L and R buttons, and orbiting camera with the C-Stick held up or down. The 3D trophy is displayed in tandem with the 2D image.[1]

The entirety of the Trophy Hoard in Brawl 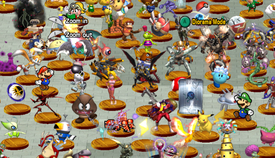 A selection of trophies seen in the mode.

The Collection mode reappears in Brawl as Trophy Hoard. While it reprises its original function, it has dramatic differences from its Melee incarnation.

The setting of the Hoard is now completely different. Instead of an ordinary room, all the trophies are instead displayed on what appears to be a clearing on a parapet; the walls of a castle lined with small flags with the Smash symbol appear in the background, as well as a bright sky. The grid has been removed in favor of a large Smash logo. The consoles and other props have been removed as well. The layout of the trophies can be changed by holding a direction on the Control Stick or Control Pad before the Hoard appears.[2]

The Trophy Hoard also gives the player the ability to use the Diorama Mode; the player can take any four trophies that they have and arrange them however they need on a selection of four backgrounds. Afterward, the player, using a menu similar to the Camera feature in normal gameplay, can take snapshots of the arrangement of trophies.

The Hoard still appears at the end of Single Player modes, though only for Classic and All-Star. However, the player's character instead immediately drops down as a trophy; when they land, the other character trophies are immediately arranged in a predetermined order, unlike the random placement of Melee.

In the 3DS version

The Trophy Hoard returns in Super Smash Bros. 4, reprising much of its role from the previous two games. The locale for the actual hoard has been changed again; continuing the fantastic locale of Brawl, Smash 4's Trophy Hoard is placed within a large, expansive meadow atop a floating island, with the trophies being placed within a large, circular area that features the Smash Bros. logo within it. As the Nintendo 3DS features two screens, the top screen is used to look at the Hoard itself, while the bottom screen shows a map, complete with showing what part of the Hoard the player is looking at. When the player collects more trophies, a larger area of the Hoard can also be seen at a time. The hidden function of rearranging the trophies returns from Melee. By pressing on the four directions of the D-Pad while selecting the Trophy Hoard, the player can arrange the trophies in a triangle, circle, and square.

An image created via the Photo Studio.

Brawl's Diorama returns in Super Smash Bros. for Wii U, but not in the 3DS version. Referred to as the Photo Studio in a Miiverse photo, it acts similarly to its predecessor, albeit with more freedom relating to the placement of trophies; trophies themselves are no longer "locked" to the ground, and can now be freely rotated and moved in the air. However, the Photo Studio can only be accessed if the player has inserted an SD Card into their Wii U.

The Trophy Hoard again appears in the endings for Classic (in both the 3DS and Wii U versions) and All-Star modes, with the player's character's trophy again appearing in the area when the modes are complete, alongside any other specific trophies they have previously acquired in the mode. The Hoard, however, looks different in the endings; instead of the meadow at daybreak, hundreds of stars can be seen in the sky, alongside a single shooting star.

Collection mode is now a sub-menu, featuring completely new modes exclusive to Ultimate. Team Setup is where a Spirit Team can be created and saved with a name. Level Up is where snacks and cores can be fed to primary spirits obtained from won Spirit Battles. Dismiss is for sending spirits back to their homeworld and obtain their cores to be sold, fed to other primary spirits, or for summoning another spirit. Summon is where the player can summon a spirit only if they have the cores to summon the spirit in question. Inventory has two modes, Spirit List in which the player can view the spirit image and know what series it originated from and Items allows the player to sell Spirit Board items and cores for SP. Once the player has obtained at least one Gym/Explore/Dojo-hosting and Shop-hosting master spirit in World of Light, they will be able to access Activities and Shopping menus respectively, allowing the player to access them without entering World of Light first.