From SmashWiki, the Super Smash Bros. wiki
(Redirected from Target Smash!!)
Jump to navigationJump to search

Wolf in Brawl's Target Smash!! Lvl.1. Note the size of the targets compared to Wolf.

The game records the shortest time taken to smash all ten targets. If a character has never smashed all the targets, the game will also record how many targets were smashed in that time. There is also a total time that is kept that includes the cumulative time taken to clear every character's stage, which appears only after all characters have cleared their stage.

Each character in SSB has their own target test. Mario's and Donkey Kong's stages resemble the construction girders from the original Donkey Kong, while Luigi's resembles the layout of the Mario Bros. arcade game. Yoshi, Pikachu, and Jigglypuff use light-coloured blocks with grass; futuristic characters use grey metal; and everyone else uses bricks. All target tests utilize the unique abilities of their character. For example, Mario's requires him to use his Fireball to smash at least one target.

In 1P Game, during the first Bonus Stage, this mode is announced as Bonus (Practice) 1: Break the Targets").

In Melee, like SSB, every character has their own Target Test. Their target tests often require use of character-specific techniques, such as Ness requiring to use his PK Thunder. Some characters' target tests reference locations in their own series, such as the Ice Climbers' target test looking much like the levels in their game, and Mario and Donkey Kong's target test loosely resembling the setting of Donkey Kong. Some stages even include images, symbols, or other characters from the character's game (such as the Triforce appearing in Zelda/Sheik's stage and the Condor at the top of the Ice Climbers' stage). Like with the original Smash Bros., the level design can be based off of the character's genre, such as characters affiliated with royalty featuring Greek columns and futuristic characters featuring metallic structures.

Some unique traits occur in each character's Target Test:

In Classic Mode, during the first Bonus Stage, this mode is announced as Break the targets! (the exclamation mark is omitted in the PAL version), resembling the original Super Smash Bros.' name.

In Stadium mode, when starting or restarting the stage with a controller in port 1 while holding onto either L or R, a song from the character's universe plays instead of the "Targets" theme. These songs also play for their respective characters during the end credits and after winning Tournament mode. 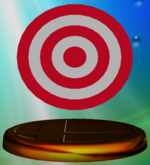 The Target trophy in Melee.

Several changes have been made in Brawl, ranging from minor aesthetic alterations to complete functional changes. Most notably, instead of each character having their own one Target test, there are five generic Target Smash stages of varying difficulty that all characters can play on. Increasing difficulties feature smaller targets and bigger stages, making it both harder to break the targets as well as move from one target to another. The color of the targets also matches the difficulty color. Also, each stage of Target Smash is set to be on a specific stage from The Subspace Emissary.

For a first in bonus games, some stages incorporate items. As with most Stadium games in Brawl, Co-op mode is available. Players can now record and save replay footage of their attempts at completing the mini-game.

Oddly, some moves that do not inflict damage or require a grab to damage foes can affect Targets:

Two Target Smash levels are played as bonus stages in Classic Mode. The first occurs after Stage 4, and is the level corresponding to the chosen difficulty. The second is played after Stage 10, the level being one higher than the chosen difficulty (Level 5 again if playing on Intense). When played in Classic, there is a two minute time limit to complete the stages. Once a level is played in Classic, it becomes available in Stadium.

This is a simple course, with very large blue targets, all near each other. It appears to be set in The Lake.

This is somewhat more complex. There are various high cliffs that have green targets at the top. There are also items scattered around the stage. It appears to be set in The Wilds.

This stage is unique as it has a Slide Launcher, a spring, as well as a conveyor belt. It is set in a partial Box. It too has items. It appears to be set in The Swamp.

This level is icy, causing players to slip. Most of the orange targets move, often requiring perfect timing to complete fast enough. There is one non-moving target that is very difficult to get, located at the bottom right of the stage, and for some characters, it has to be gotten last. This stage has no items. It appears to be set in the Glacial Peak or in Summit.

This is the final Target Smash level. It has small red targets, spikes, springs, items, and moving platforms. It appears to be set in the Ruins.

All of the challenges associated with Target Smash!! can be broken by a Golden Hammer.

As a stand-alone mini-game, Target Smash has been replaced by Target Blast in both versions of Super Smash Bros. 4. However, a more traditional Target Smash! can appear in three variants - easy, medium and hard - behind Challenge Doors in Smash Run. 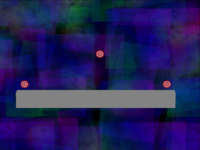 The background of level 2, with the section of The Wilds visible

The section of The Wilds where the background came from. Note the different skybox, and added obstacles.