Should there be an article for each individual Target Test, including strategies and world records? WaluigiIsAwesome 06:46, January 30, 2007 (GMT)

That'd be an option, but it would take a lot of effort (and a lot of different articles). For now, I suggest we make three different articles for 64, Melee and Brawl, list each character's stage (with a brief description) and the world record for completing it, then move on from there. It's still a lot of effort, but we could probably pull it off. WarxePB 03:23, October 24, 2007 (EDT)

I think that there should be an explanation about how to open new levels of Target Smash in Brawl. I have seen many people ask about this with no explanation anywhere. I think it is done in Classic mode, but would like to find out for sure.

I've only played SSB for an hour at a play and trade, so I know nothing about Target Smash there. Perhaps someone who has the game can write about it.Anon 02:30, August 20, 2010 (UTC)

Are there pages for the individual Target Smashes in the first and second games? It's Turtwig A! My talk or wiki edits 17:26, 9 October 2010 (EDT)

I think I might have a good image for this article: 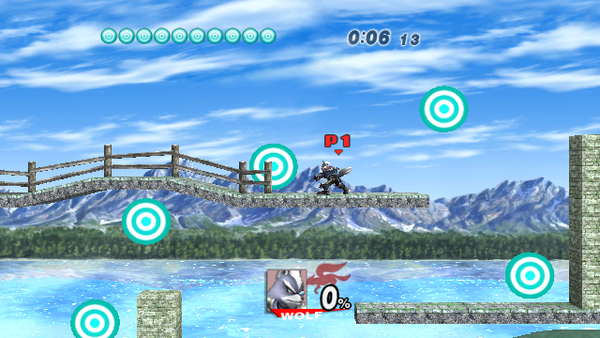 There is already a great image on this page, we don't need another one.--Shaun's Wiji Dodo talk

Then remove this: {{image}}

That is merely for new images for target test stages 3-5 and other levels or objects that need pictures, although the wording is misleading the images that are already there are fine.--Shaun's Wiji Dodo talk

Again, this one if of higher quality, so I say yes to replace the current level one target test image. But what Dodo is saying is true, that tag is mainly there since images of the other target tests are needed. Omega Tyrant

Hey, somebody removed the DK in Target Smash!! level 1 image with my image! I tought you guys didn't want to replace the DK image with the Wolf image! Whatever.

Wolf rulez! (talk) 13:12, 10 April 2011 (EDT)Wolf rulez!
I said in my post that your image was of higher quality and that I supported the replacement. Omega Tyrant

Oops. But are you the one who replaced the image of DK then? (I don't know)

By the way, I saw someone uploaded a image of Brawl's Target Smash!! level 5. Do I need to upload some images then?

Would simply pausing and screencapping be a sufficient representation? (I can't do that myself, but it might be good to have it answered at least) Smiddle 君怒る? 17:47, 2 August 2011 (EDT)

Bump. Assuming this idea is still being considered, I can provide images for all maps, if still required. --- ReiDemon, Author Extraordinaire, 00:36, 2 June 2012 (EDT)

I'd recommend uploading the images so that they're there. The community can decide on what to do later. MegaTron1XD

More bumping and such. I have been able to upload both SSB64's and Melee's Target Tests. Due to difficulties in Brawl, I can't capture any of those, save Level 1. --- ReiDemon, Author Extraordinaire, 21:36, 5 August 2012 (EDT)

I cannot take Brawl images either, but feel free to make the gallery articles for the first two games, if you are willing to do so. Toast

"The player can also play on Target Test stages in Melee as well, including an unused stage as shown here."

Should each fighter page in SSB and Melee have images of their own break the targets/board the platforms image considering that they're unique to each character? ZeldaStarfoxfan2164 (talk) is made in America 22:22, 5 June 2016 (EDT)

Well we do have the images for it, unless I am very much mistaken. Serpent

I know, and I am unsure. Could go with the charmedia stuff I suppose. Serpent