RoyboyX is my name, flaw killing is my game. You can call me Roy or RBX for short.

I have ten amiibos right now: Samus, Zelda, Luigi, Marth, Shulk, Sheik, Link, Peach, Zero Suit Samus and Mewtwo. I had Meta Knight but I traded him for Shulk. I bought Lucina, but as a gift for a friend. I would like Palutena, Roy, Bayonetta and Ryu.

Since I have added srsly way too many fighters, I split them into a new subpage. See here: User:RoyboyX/Chars for SSB4

At least be glad the image has less of them. I also created two rosters dedicated solely to underrepresented minorities in Smash: dark-minded individuals and females, both of these contain far fewer characters than the normal roster. Feel free to ask if you don't know who a certain character is from. 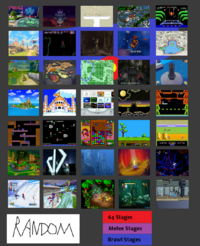 In a new Smash game I would bring back all stages that have been part of the series history, but I would merge Mushroom Kingdom with Kingdom, Planet Zebes with Brinstar, Peach's Castle with Princess Peach's Castle, Sector Z with Corneria, all Battlefields with each other, and all Final Destinations with each other. I would rename Kingdom II to Subcon, add levels 2-2 and 2-4 to Mushroomy Kingdom, and I would rename Yoshi's Island from SSBB to Yoshi's Island 2.

I scrapped Air Lock, Barn Boys (both because I scrapped the Conker chars), GB Music (Daigasso! Band Brothers), Phendrana Drifts (found it pointless), Scuttle Town (from Shantae), Tokyo (Sin and Punishment) and Zuma (from Zuma) due to them being from extra third party games with zero chance of inclusion in SSB.

The Legend of Zelda 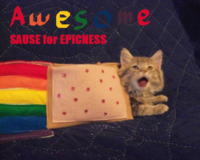 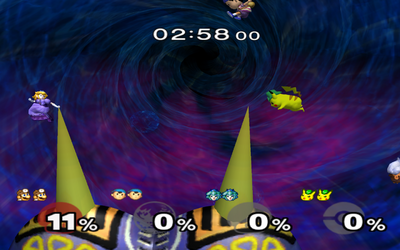 My AT picks. Warning: Large.

I wanted to put in Ayumi Tachibana, Diskun, Drawn Creation (Drawn to Life) and Pilotwings, but they wouldn't have worked.

In Brawl, supposedly there were supposed to be 38 extra Assist Trophies, with one known to have been scrapped and three supposedly fabricated.

In a new Smash game I would bring back all Pokemon, except for Butterfree, Pidgey and Fearow, who are new floats on Poke Floats.

All bosses return, though Master Hand is a playable in SSE, Crazy Hand is part of his Final Smash (both are still bosses though), Giga Bowser too, and Ridley is changed to a permanent playable, with Meta as his Final Smash.

All items would return, though Lip's Stick is now used in the Lip Assist Trophy, Flippers are part of the Balloon Fight stage, Poison Mushrooms deal 10% damage to the collector, Team Healers can now be used to heal yourself by throwing it and getting hit by it, Yoshi's Eggs can be laid without sucking in someone and they can be used like normal eggs, Pitfalls have been incorporated into Tom Nook's moveset, and Motion-Sensor Bombs hail from Perfect Dark. Banana Peels first originate as bananas that can be eaten, and once that is done they become peels that can be used on people. Crates and barrels can no longer be carried by light/middleweight characters, they can only destroy them. Heavy weights can lift them.

I would also remove challenges for being cheap, tripping, the chronicle and masterpieces for being useless, that barrier in Home-Run Contest, and make those bitches get the trophy descriptions right! So FULL of errors!

Movesets, Pokemon, stage descriptions and much else coming soon!

Here's a gallery of my simple "character reworks" as well as some images I preserve.