Race to the Finish (SSB)

For the Super Smash Bros. Melee version, see Race to the Finish (SSBM). 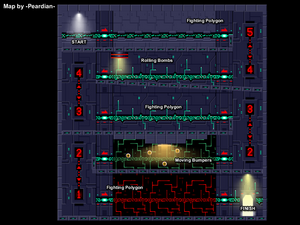 Map of Race to the Finish, courtesy of Peardian from VG Maps.

Race to the Finish (ボスのところまでたどりつけ！, Struggle On to the Boss Area!); announced in-game as Hurry to the Battle Stage!) is the third bonus game in Super Smash Bros.'s 1P Game. It is a simple multilevel stage with multiple hazards, such as moving Bumpers, explosives, and Fighting Polygons. Unlike the other two bonus games, Race to the Finish cannot be accessed outside of a 1P game without hacking.

The top level goes toward the right, with a random character polygon there. At the far right. there is an opening leading downward to the next level. This level slants slightly upward to the left, with a barrel generator hanging from the ceiling, dropping an exploding barrel every five seconds. These barrels roll slowly down the incline and explode on contact, dealing 16%. To the left of the generator is the opening to the next level. Another random polygon is there to stall players. At the far is the opening to the second to last level. In the middle of this level are four floating bumpers. To the left is the opening to the bottom level. A third and final fighting polygon is there as an obstacle. The finish line is the opening on the far right.

This stage can be played in versus mode via hacking. However, as the stage is surrounded by walls, it is impossible to KO opponents without exploiting a glitch where immense amounts of knockback (such as smash attacks at over 400% damage) can cause characters to clip through thin walls, and when any player reaches the end of the stage, all players still present win. Using hacks to KO the Polygons in this manner while in 1P Mode (which is very unlikely under normal conditions due to the time limit) reveals that eliminating them all also causes the player to complete the stage.