Race to the Finish (SSBM)

For the Super Smash Bros. version, see Race to the Finish (SSB). 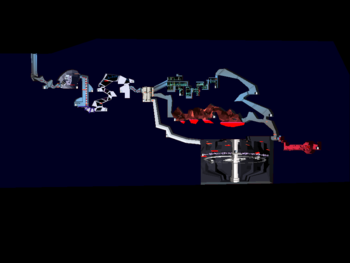 The entire Race to the Finish course.

Race to the Finish (つきすすめ！, Push on Forward!), announced in-game as Race to the finish! and known by the debug menu as TUKISUSUME, is a bonus game in the Classic Mode of Super Smash Bros. Melee. It is a timed dash to the end of a labyrinthine corridor with many doors along the way. Touching one of these doors will end the game and give players coins and extra points based on how far they got into the area. The area is initially fairly linear though not quite straight, with no hazards to start with; about two-thirds of the way through, there is a three way fork in the corridor with each way presenting a different hazard: the top path having spiked walls, the middle having lava, and the bottom having a bottom blast line and a sparse amount of platforms to get across. However, like in Adventure Mode stages, the camera stops in place and temporary blast lines appear when a character goes into hitstun. All paths later join up to lead to a short final stretch with a single spiked block floating just before the final door. The Battlefield music plays on this stage.

The stage can be used as a playable stage in VS. Mode through various cheat devices such as the Action Replay; only the first player can touch a door, which causes the game to freeze.

Each character is allotted a specific amount of time to finish the course. While there is a general pattern where characters with faster dash speed, falling speed, and air speed are given less time than characters weak in these areas, there is no mathematical correlation between any of a character's physical properties and how much time they are given; it is simply an arbitrarily-chosen number. 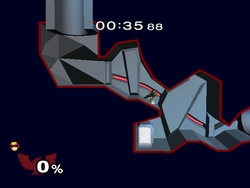 The beginning of Race to the Finish.

* While Sheik is much faster than Zelda, they both have the same time, allowing Sheik to finish unnaturally early.