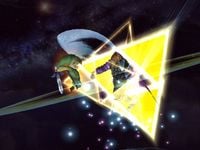 The attack starts out with the Triforce symbol on the back of the user's hand glowing (and in SSB4's case, a large projection of the Triforce visibly being shown hovering above the user's hand). A ray of light will stun anyone horizontally in front of him. The user will then dash toward an opponent stunned by the beam and strike them repeatedly for an immense amount of damage. The ambient time stops, making it safe when used in moving stages. The Super Smash Bros Brawl: Premier Edition player's guide says that the attack can only reach two character lengths in front of the user. However, the guide is incorrect: the attack can actually reach all the way across Final Destination for Link and halfway across for Toon Link if one holds on to the special button.

This attack seems to be primarily meant for a single target, but more than one character can easily be hit simultaneously if they are close enough to each other and can even KO multiple characters. Ike's Great Aether is very similar to Triforce Slash, as they both trap the opponents in a barrage of powerful slashes, but one of Triforce Slash's advantages is that it can be done at the edge of the stage, greatly increasing the rate of KO. Apparently, another player can change the knockback angle of the final blow that ejects the opponent. When the user is pausing to charge the final blow, another player can attack the trapped player and when the user unleashes the ejecting blow, the victim will be sent flying according to the knockback of the other player's move.

Toon Link's Triforce Slash does the exact same amount of damage and number of hits as Link's, and only differs in appearance/sound effects. Toon Link's Triforce Slash has a more cartoony appearance than Link's, as a reference to The Legend of Zelda: The Wind Waker's cartoonish graphic style. In addition to Toon Link's version being more The Wind Waker-esque, it is also a bit slower. It also has a much lower range and slightly less knockback, but on the flip side has much less startup time. The final strike at the end of his Triforce Slash has greater range than Link's, though only has around the strength of a smash attack. Note that the character will get super armor from being caught by the Final Smash, but they are also trapped in the spot where they are caught by the Triforce symbol.

In Ultimate, Young Link's Triforce Slash is much closer in appearance and function to Link's in SSB4 than to Toon Link's version.

In Brawl, the attack can deal up to 83%. The initial trapping hit deals 5% damage. Each strike will cause 4% and trap any victims for the next strike, until the 15th which ejects all but the primary target from the attack. The last strike causes 18% damage and immense knockback to the main target and anyone close enough to it. This is the same for both Links.

In Ultimate, Toon Link's version deals even less, with its maximum damage being reduced to just 56.2%. Instead of 3% the first 14 hits deal 2.8% and the final hit deals 14% down from 15%. However, Young Link's version retains the 60% damage output from SSB4, as well as the full knockback from said game, being one of the few returning Final Smashes to not have a knockback reduction.

Triforce Slash (Link)
Link with a Smash Ball, releasing his ultimate attack. Light flares from the Triforce symbol on the back of his hand and rushes out to meet the enemy he faces. The enemy gets trapped within the glittering Triforce, is quickly cut to shreds, and is launched by the last strike. The attack works on one enemy at a time, so it's best to go after the character in first place.

Triforce Slash (Toon Link)
Toon Link's Final Smash. Hit an enemy with the light emanating from the Triforce mark on his hand to initiate the move. The enemy will be trapped within the Triforce and be unable to move--Toon Link will then rush in close and carve up his foe at lightning speed. The final blow will break the Triforce prison and send the opponent off the screen.

Link makes use of the Triforce of Courage to trap foes, and then he launches a 16-blow combo. The final, mighty blow has the power to launch opponents off the stage. When Link prepares the attack, the ray of light he emits must strike a rival, or the attack will fail. Shielding will do nothing to stop this powerful attack.

Link traps a foe in mid-air with the power of the Triforce of Courage, then delivers a 16-strike sword combo. The final strike has formidable launching power. If the ray of light at the start of the attack doesn't hit, the whole thing ends there. Helpfully, though, the ray of light's range and speed are incredible, and shields won't block it.

For Toon Link's Final Smash, a ray of light emanates from his hand, and whomever the light touches gets trapped in the Triforce. While they're defenseless, Toon Link strikes at foes repeatedly and then launches them a great distance. Just be sure to time the Final Smash well—if the ray of light doesn't touch anyone, nothing happens. At all.

For Toon Link's Final Smash, a ray of light emanates from his hand, and whoever the light touches gets trapped in the Triforce. While they're defenceless, Toon Link strikes at them repeatedly, then launches them a great distance. Just be sure to time the Final Smash well – if the ray of light doesn't touch anyone, nothing happens. At all.

The Triforce Slash glitch [1] is a glitch that allows Link or Toon Link to "slide" across a curved platform in Super Smash Bros. Brawl.

Another method is to have R.O.B. use his up smash and while he is upside down, use the Final Smash. The player will go flying, then become helpless and R.O.B. will receive 30% damage.

The three pieces of the Triforce.

This move is unique to the Super Smash Bros. series. However, it is similar to the final blow performed against Ganon during the final boss battle in The Legend of Zelda: Ocarina of Time. In this game, once Ganon has been damaged enough, he falls down and Zelda uses her magic to paralyze him, leaving him vulnerable to a final strike, which consists of three slashing attacks before Link pierces through him with his sword.

Years after Triforce Slash's introduction in Brawl, a similar rush of sword strikes became one of Link's abilities in The Legend of Zelda: Breath of the Wild through dodging with perfect timing, known as Flurry Rush. However, the Triforce plays no part in the move.