Link raises his hands in the air as a bomb rune materializes, then proceeds to hold it in his left hand. Unlike its previous incarnation, it does not explode on impact. Rather, it bounces off opponents and has to be detonated remotely by pressing down special again, in a manner similar to C4. The bomb will also explode after around 30 seconds, significantly longer than his traditional bomb would, and explodes instantly if hit by fire. If the bomb is held by an opponent or captured by Pocket, it cannot be detonated. The bomb also cannot be detonated if the user is in special fall, notably after using Spin Attack, however, its use as a recovery extension is still far greater since Link can Z-drop the bomb and explode it on his own granting him notable distance. This allows him to recover from the deepest parts of the stage so long as his % is high enough. The bomb can also be thrown downwards or upwards by moving the C-Stick/Right Joystick either up or down. Link holding a spherical Remote Bomb in The Legend of Zelda: Breath of the Wild. 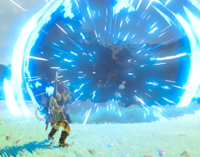 Link detonating a spherical Remote Bomb in The Legend of Zelda: Breath of the Wild.

In The Legend of Zelda: Breath of the Wild, Link has a Sheikah Slate, with which he can use four different Runes (seven if amiibo, Master Cycle Zero, and Camera are counted). One of these Runes is the Remote Bomb, which, when used, Link will pull out either a cubic or spherical Remote Bomb, after which he can throw it and detonate it by using the Rune again; only spherical bombs are available in Ultimate. The behavior of Remote Bombs in Ultimate is slightly different from that in Breath of the Wild; for example, they will detonate after contact with fire or after 30 seconds, unlike in Breath of the Wild where they can only be detonated on command. Bombs in Ultimate also have no respawn timer.