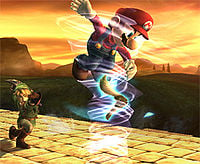 The Gale Boomerang in Brawl.

The Gale Boomerang is a useful tool for spacing opponents. One can tap the control stick while doing this move to increase its range, and tilt the stick up or down to aim it towards those directions. If the player dodges the Boomerang as it comes back to them, it will continue flying and curving towards the direction they dodged in. Link can only have one Boomerang on screen at any time; trying the attack again while a boomerang is out only results in Link doing his boomerang throwing animation without actually throwing anything.

When returning, the Gale Boomerang drags opponents towards Link, dealing no damage at all. If used properly, the player can string a number of different attacks following the boomerang's retrieving tornado. Link's side standard smash would be the most favorable attack of choice, as it would cancel the knockback allowing the second hit to connect. Link's down smash - if used with correct timing - can also damage opponents with both hits, causing a significantly larger amount of damage. Care has to be taken with this technique, though; as the Gale Boomerang doesn't do damage while dragging opponents, the opponent can also take the chance to prepare their own attack while being drawn towards Link. The Gale Boomerang is also capable of throwing large items forward and bringing small items toward Link.

If reflected, the Gale Boomerang automatically enters the second phase of its attack, meaning Link cannot be hurt by it, only pushed away by it.

The move can be used to perform Gale Guarding. If timed perfectly, one can ride atop on the Gale Boomerang.

Interestingly, the Gale Boomerang seems to cancel the landing lag from any of Link's aerial attacks if it returns to Link while he is on the ground after an aerial attack, most noticeably, his down aerial.

The Gale Boomerang from Twilight Princess.

Boomerangs have been one of Link's main weapons since the very first The Legend of Zelda game; while generally inferior to the Bow as a means of indirect attack, it is reusable, capable of pulling items back to Link, stuns enemies, and triggers switches, making it more of a tool than a true offensive weapon; enemies such as Goriyas also possessed boomerangs as their main weapons as well. Some weak enemies could be defeated using the boomerang, and in some games the boomerang was capable of cutting down objects.