This article is about the side special move of Link, Young Link and Toon Link. For the item from the Mario series, see Boomerang (item); for Link's variant in Brawl and Smash 4, see Gale Boomerang.

The boomerang is a useful tool for spacing opponents. One can tap the control stick while doing this move to increase its range, and tilt the stick up or down to aim it towards those directions. If the player dodges the boomerang as it comes back to them, it will continue flying and curving towards the direction they dodged in. Link can only have one boomerang on screen at any time; trying the attack again while a boomerang is out only results in Link doing his boomerang throwing animation without actually throwing anything.

Originally, Link took out the boomerang and merely tossed it with a slight overhanded toss, while as of Melee he instead swings it behind himself before tossing it forward sideways and somewhat underhanded.

As a custom move for Gale Boomerang[edit]

The Boomerang glitch [1] is a glitch in Super Smash Bros. Melee (version 1.1). It is a minor glitch discovered by Jimmymcjimthejim that causes Link's boomerang to get stuck to his arm, thus disabling his ability to throw it again. This glitch is caused by getting touched by a Poison Mushroom, or in Tiny Melee, during the frame animation when Link is throwing his boomerang. The glitch may fix itself at times, and self-destructing will end it automatically.

The boomerang superjump glitch can be performed by both Link and Young Link. 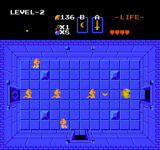 Link using the boomerang in the original The Legend of Zelda game.

Link's boomerang from The Legend of Zelda: Breath of the Wild.

Boomerangs have been one of Link's main weapons since the very first The Legend of Zelda game; while generally inferior to the Bow as a means of indirect attack, it is reusable, capable of pulling items back to Link, stuns enemies, and triggers switches, making it more of a tool than a true offensive weapon; enemies such as Goriyas also possessed boomerangs as their main weapons as well. Some weak enemies could be defeated using the boomerang, and in some games the boomerang was capable of cutting down objects.

The design used by adult Link in the original Super Smash Bros. and Melee, as well as by Young Link, is based on its design in The Legend of Zelda: Ocarina of Time, where it was the main dungeon item of Inside Jabu-Jabu's Belly, the third dungeon. However, in Ocarina of Time, only Young Link can use the boomerang; adult Link cannot.

The design used by Toon Link is derived from the one featured in The Legend of Zelda: The Wind Waker, where it was the dungeon item of the Forbidden Woods.

The design of Link's boomerang in Ultimate is based on the standard boomerang from The Legend of Zelda: Breath of the Wild, where it has no special attributes other than returning to the player after being thrown, although it can also be used as a melee weapon in close combat.