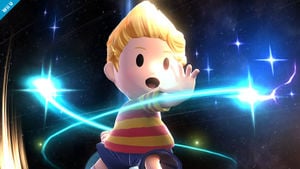 Healing refers to reducing one's damage percentage (or restoring HP in Stamina Mode). A few characters are capable of doing this with one of their special moves, and usually in only small amounts. Alternatively, some items may restore the user's health, and it is possible to be healed by certain stage elements. In Smash 4 exclusively, equipment can be used that has restorative properties. Since Brawl, most forms of healing are accompanied by a signature sound cue of escalating synth notes.

Robin heals as he uses Nosferatu against Mega Man in SSB4. 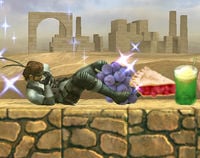 Snake heals as he eats while reclining in Brawl.

Kirby near an apple on Green Greens in Melee.