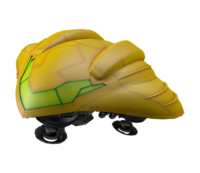 Samus' Gunship as it appears in Metroid: Other M.

Not to be confused with the Subspace Gunship or Gunship (Final Smash).

The Gunship (スターシップ, Starship), also referred to as the Starship, is Samus Aran's spacecraft.

Samus' Gunship as it appears in Metroid Prime 2: Echoes.

The Gunship appears throughout the Metroid series, first appearing in Metroid II: Return of Samus. Her trusty starship is there when Samus needs to ride around the galaxy. She uses it as a resting place to regain health and ammunition; it also functions as a save point for players to save game data. The front of it also appears to be based on the design of the front of her helmet.

Samus's most iconic Gunship has appeared frequently in both the Metroid and Smash series, with minor design alterations between Super Metroid, Metroid Prime 2: Echoes, and Metroid: Other M reflected by its appearances throughout the Smash series. However, other ships have been used by Samus over the years, two of which have been the basis of stickers in Brawl. Her original ship in Metroid: Zero Mission is shot down by Space Pirate vessels after the defeat of Mother Brain. She replaces her lost ship with a new Starship, seen in Metroid Prime and Metroid Prime Hunters. In Metroid Prime 3: Corruption and Metroid Prime: Federation Force, Samus has a ship that she can control remotely via the Command Visor to fire missiles at targets. Finally, after her iconic ship crashes into an asteroid belt in Metroid Fusion, Samus receives a new Galactic Federation Starship with the A.I. of Adam Malkovich as an onboard computer. 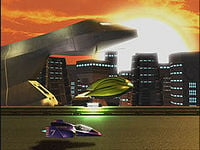 Samus's Starship in the opening movie of Super Smash Bros. Melee, along with the Great Fox and Blue Falcon.

The ship appears in the game's opening movie, and as a trophy. Its design is derived from Metroid II: Return of Samus, with the color scheme from Super Metroid.

Samus's Starship
This compact ship is used by Samus as her base of operations. Of course, Samus can't fly it into the catacombs of every planet she visits, so she leaves it on the surface as her sanctuary. Samus can recharge her Power Suit inside the ship, so it tends to be the only safe and secure spot on inhospitable alien terrain.

The Gunship in The Subspace Emissary.

Samus's gunship appears as a trophy and as three stickers in Brawl. It is also seen in Adventure Mode: The Subspace Emissary, with the updated design seen in Metroid Prime 2: Echoes.

Role in the Subspace Emissary[edit]

After the Halberd is torn asunder, Samus' starship emerges, along with the Falcon Flyer, Falco's Arwing and Olimar's Hocotate Ship. Engaging the Subspace Gunship, Samus and the other pilots kept the huge ship busy while Kirby destroyed it with the Dragoon. Samus then followed Kirby's Dragoon into Subspace.

Gunship
The ship that Samus pilots. Entering the gunship allows Samus to restore energy and save. Samus has been on numerous voyages in the gunship, but after being attacked by an X parasite in Metroid Fusion, she crashes into an asteroid belt and destroys the craft. After that, the Galactic Federation provides her with a new starship. 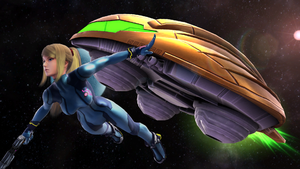 Now using its Metroid: Other M design, Samus's gunship appears as part of Zero Suit Samus's new Final Smash, where she uses the ship's weapons to fire at other players from the foreground. It is also featured as part of her on-screen appearance.

In Super Smash Bros. for Wii U, the gunship also returns as a trophy (separate from the one that depicts the Final Smash). It is a challenge reward, earned by clearing the true Solo All-Star Mode as Zero Suit Samus without recovering any health between rounds.

Gunship's trophy in Super Smash Bros. for Wii U

The one partner Samus can rely on in almost all of her missions. In the wide unknown of outer space, she can always return to the Gunship for a safe haven. It allows her to replenish all of her energy and ammunition and even serves as a resting spot for the player. It sounds just like a save point, doesn't it?

The one partner Samus can rely on in almost all of her missions. In the wide unknown of outer space, she can always return to the Gunship for safe haven. It allows her to replenish all of her energy and ammunition, and even serves as a resting spot for the player. In other words...it's a save point.

The Gunship appears in both Zero Suit Samus's and Ridley's Final Smashes.

The Gunship in Ridley's Final Smash

In Ridley's Final Smash, Plasma Scream, he throws victims against the Gunship and unleashes a plasma attack on them. The ship is then seen crashing in the background.

The Gunship also appears as a spirit, using artwork from Super Metroid.