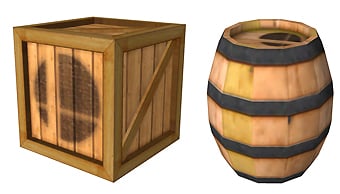 Two variants of the container: Barrel and a Crate

The container items also make an appearance in Super Smash Bros. Brawl. The traditional barrel and crate return as a container item, but also there are new variations of crates and barrels that varies on the stage the characters play on. For example, on the Yoshi's Island stage, the boxes and barrels are in the shape of presents. There is also a new type of item called the Rolling Crate that will roll down an inclined plane if a character pushes it. Container items are also now changeable via the Item Switch.

In Super Smash Bros. 4, all characters carry heavy containers (and Blast Boxes) at the same speed, which has been increased slightly compared to the carrying speed in Brawl. Donkey Kong still moves the fastest.