From SmashWiki, the Super Smash Bros. wiki
(Redirected from Edgeguard)
Jump to navigationJump to search 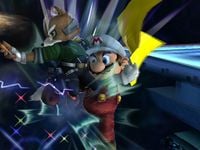 Mario uses his Cape against Fox trying to use Fox Illusion as recovery.

Meteor smashing is a very popular and effective technique when used for edgeguarding.

Edgeguarding is the attempt to prevent an offstage recovering opponent from reaching the stage, thus causing them to be KO'd. Players can achieve this in many ways, and the struggle between an edgeguarder and their recovering opponent often leads to many strategies and mindgames. The anti-strategy to this is the guard break.

There are two main methods of edgeguarding. One is to run or jump off the stage and attack; this is often done by characters with great jumping ability, which includes multiple jumps and good recoveries such as the Robo Burner. The other is to stay on the stage and attack the opponent when they recover should they fail to sweetspot the ledge. This is mostly done with down smashes and tilts, and even some projectiles.

Any character can edgeguard, although some are better at it than others. A character's ability to edgeguard offstage is determined by two factors: the length and safety of their recovery, and the utility of their aerial attacks. The most prominent example is Meta Knight, as his recovery is effectively immune to edgeguarding, and because his aerials are quick and send opponents on favorable trajectories. However, some characters are strong edgeguarders despite having subpar recoveries; Ganondorf is the best example. His recovery is slow and short, but all of his aerials are deadly offstage.

In general, the recoveries of the cast have improved across the games. In Smash 64, aside from Pikachu and, to a smaller extent, Mario, all characters have predictable recoveries, leaving them vulnerable to edgeguards, which is further compounded by the game's high hitstun.

Melee recoveries, while still rather predictable, are benefited by ledge teching. Jigglypuff and Samus are well-known for their recovery ability, with the former having arguably the strongest edgeguarding ability in the game. Melee introduces meteor cancelling, which makes meteor smashes much less potent at securing offstage KO's. However, the increased falling speeds and gravity make semi-spikes more effective. Certain attacks, known as spikes, have downwards knockback that are not recognized as meteor smashes, and characters who possess these moves often utilize them in their edgeguarding, most notably Marth, Captain Falcon, and Falco.

In Brawl, recoveries are overall longer, and the larger ledge sweetspots, as well as the auto-sweetspot mechanic, make edgeguarding less effective. The meteor smash recognition window has been expanded, removing the spikes of the previous game. Meta Knight is infamous for his immunity to being edgeguarded, due to his plethora of recovery options, with his recovery being the best not only in Brawl, but arguably the entire series, and this grants him his powerful offstage game. Brawl's floatier physics, low hitstun, meteor cancelling, air dodges, and the aforementioned changes to ledge sweetspots arguably make edgeguarding in this game the least effective out of all five iterations, along with the ability to buffer wall techs being removed. In these three games, edgehogging is a commonly used tactic to stop opponents who aim their recoveries to the ledge.

In Smash 4, recoveries on their own were generally buffed, and ledges were reworked to remove edgehogging, reducing the effectiveness of onstage edgeguarding, and simultaneously making planking impossible by altering edge regrabbing, so that grabbing an edge again will not grant a character any intangibility, until the character lands back on stage or takes hitstun. However, meteor cancelling has been removed, making meteor smashes as deadly as they were back in Smash 64. The new ledge stealing mechanic can set up recovering opponents for an attack, most commonly a back aerial. The longer recoveries enforce and encourage more aggressive offstage play, as offstage edgeguarding carries much less risk than before, since an edgeguarder can no longer be edgehogged if their attempt is unsuccessful. Also, the improvements to recoveries are not consistent across the cast. Marth's recovery is largely unchanged from before; Fox's recovery is twice as long as in Brawl, as Fox Illusion and Fire Fox can now be used in tandem, Ganondorf's recovery is even worse due to his lowered air speed and the removal of grab armor, and Charizard suffers severely with the loss of gliding despite the addition of Flare Blitz. Most notably, Smash 4 introduces Little Mac, whose recovery is undoubtedly the worst in the entire series. Lastly, in Smash 4, teching cannot be performed during hitlag, causing certain stage spikes to be untechable, and the new ledge mechanics make stage spikes more common than in past games. All these changes have contributed to more offstage battles in competitive play, as edgeguarding is much safer while still rewarding if successful. As in Brawl, Meta Knight is noteworthy for his edgeguarding ability, along with characters who possess useful meteor smashes, particularly Captain Falcon and Ganondorf.

In Ultimate, ledge sweetspots were overall toned down, making it more difficult to recover safely and easier to edgeguard as a result. Additionally, the changes to air dodge mechanics make it much harder to avoid edgeguarding than the previous games. However, techs have been altered considerably: there is a noticeably larger tech window than the previous games, but techs can no longer be performed if a strong enough attack connects. This makes stage spikes more or less effective depending on the opponent's current damage.

The simplest and safest way to edgeguard is to stand at the edge and throw attacks — often a powerful forward smash, down smash, or down tilt that can hit even an edge sweet spotting enemy. While this method of edgeguarding requires the least setup, it is often thwarted by sweetspotting or ledge teching.

In a similar strategy to sitting on stage, a character with projectiles (especially projectiles affected by gravity, like Peach's turnips or Mario's fireballs) can stand by the edge and try to interrupt a faraway, recovering opponent. This strategy is very safe, in that players are very unlikely to be hit while edgeguarding in this fashion, and it can be combined with both edgehogging and attacking from onstage.

A risky, but deadly, way of edgeguarding is to jump offstage and interrupt the opponent in midair. The recovering enemy has few options by which they can defend themself, such as using aerial attacks, air dodging, or directing themself away from the edgeguarder, all of which can cause their recovery to fail even if they thwart or avoid the enemy's attack. When using this style of edgeguarding, most characters put their own life in jeopardy, being so far offstage. If, however, the edgeguarder is able to land a powerful aerial attack (like Captain Falcon's Knee Smash) far offstage, their enemy will almost certainly get KOed. Even if unsuccessful, the edgeguarder can often edgehog the recovering opponent anyways, pre-SSB4.

With most characters, it is best to avoid using the second jump before hitting the opponent. Many characters will not be able to make it back without it. Characters such as Jigglypuff, Kirby, and Meta Knight are very useful characters to use for this strategy, since their multiple jumps allow them to go far off stage, deliver an aerial attack, and return to the stage afterwards.

A common way to edgeguard is to edgehog, or grab the ledge so that the opponent cannot. There are several ways to reach the ledge when standing onstage. The two most common ways are to face away from the ledge and either short hop or wavedash backwards. Many players, when wavedashing backwards, make the mistake of standing too close to the edge before wavedashing, thereby air dodging offstage and self-destructing. Note also that with some characters, it is possible to fastfall the wavedash off the stage and in effect grab the edge sooner.

Usually, an edgehogger rolls the moment the recovering enemy uses their third jump, gaining invincibility frames and defending themself against damaging up special moves. Edgehogging is effective against sweetspotting, but can be beaten by an enemy that comes fully onstage in their recovery.

When an enemy lands fully onstage, they are often caught in the lag of their third jump. Edge hopping is often the method to keep them off the stage. This causes one to return to the starting position of choosing which edge guarding technique to use, but the opponent has slightly more damage, leading to a constant edgeguard game.

Starting in Super Smash Bros. 4 and onward, grabbing onto a ledge that has already been grabbed by another player will gently remove them from the ledge. While ledge trumping was intended to negate edgehogging, it can still be used as an effective edgeguard; an onstage player ledge trumps a recovering player by running offstage and fastfalling onto the ledge as soon as the recovering player grabs it. This causes the recovering player to automatically let go of the ledge and they cannot take any action for a moment, allowing for an easy combo, such as Sheik's back air. In addition, the removal of ledge regrab invincibility can be exploited by a ledge trump edgeguard.[2]

To avoid getting ledge trumped, one can simply buffer an attack, a jump, or a roll from the ledge the moment it is grabbed. A regular getup and dropping from the ledge cannot be buffered, making it much easier to trump someone attempting these ledge options, and waiting too long to buffer the previous options will still result in getting trumped. These can all be mixed up for mindgames.

A somewhat underutilized ability, deterrence, is basically fake offstage guarding. The player would make to jump towards the opponent trying to recover, but instead return to the stage without ever engaging the enemy. If done convincingly, the opponent will attempt to evade the nonexistent attack and hopefully miss the ledge or dodge right into a different attack.

While this strategy works against newer players, it usually requires a twist against more advanced combatants. In this case, doubles play is usually necessary.

For example, one possible strategy involves Marth attempting a spike on an oncoming enemy from an above platform, while having Roy charge a Flare Blade below. From here, one of four things happen:

. His back aerial is also a reliable option for scoring a KO, and his down aerial can meteor smash on the clean hit. Space Pirate Rush can be used offstage to throw opponents into a stage spike. Wing Blitz can be aimed downwards to spike opponents near ledges.