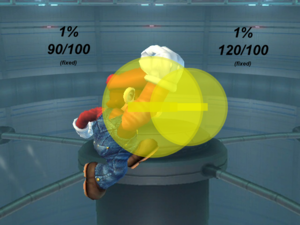 The hitboxes of the pre-final hits of Super Jump Punch in Brawl, an example of an attack that utilizes the autolink angle.

The autolink angle works differently for each of its possible angles, though all of them have the same purpose: to ensure opponents will stay trapped by certain multi-hitting moves that cause or require their users to move, almost always through the air. To accomplish this, they usually send opponents in the direction the attacker is moving, with some angles additionally pulling them towards the center of the hitbox that struck them. Examples of such moves where the angle manifests itself are Mario's Super Jump Punch and Falco's forward aerial. It is notably much more common in Smash 4 and Ultimate than in Brawl, as many characters with multi-hitting aerial attacks have had these moves adjusted to include it.

The angle does not exist in the original Super Smash Bros. or Super Smash Bros. Melee; all attacks in these games have fixed angles, including those that received the autolink angle in later games. It is typically considered favorable for an attack to employ the autolink angle, as this allows it to connect more reliably and sometimes be used in more versatile ways than one that has a static, unchanging angle; this includes the ability to launch opponents downwards, which causes the autolink angle to be considered a form of unconventional meteor smash.

While not all moves that use autolink angles have set knockback, all of them except those with the 363° angle adjust launch speed using the attacker's distance and (if applicable) the opponent's position, allowing them to still link their hits properly regardless of the opponent's percent. However, hitstun is still determined by the numerical result of knockback, so autolink moves can have low launch speed and high hitstun, rather than them being directly proportional. In Smash 4 and Ultimate, as most autolink moves are multi-hit aerial attacks, this trait can be taken advantage of for several kinds of combos, by dragging the opponent long distances down and landing before the non-autolinking hits come out, then hitting the opponent while in hitstun or locking them if the knockback inflicted is high enough to knock them down as they land. Greninja and Joker's up aerials are well known moves for exceling at these abilities, as they can be followed up from several moves and bring opponents down to the ground to extend combos farther. Alternatively, this can be done offstage to gimp them very effectively with autolink moves that deal high knockback, such as in Smash 4, Luigi's Luigi Cyclone and Fox's forward aerial followed by a footstool jump, which usually take stocks even at very low percents if successful.

In Smash 4, autolink angles have been commonly misconceived as the reason for the first hits of certain multi-hit moves, particularly up specials such as Peach Parasol and Screw Attack, KOing opponents at unnaturally early percents when the attacker has high rage. This actually happens merely due to such moves' first hits usually having high set knockback in order to connect quickly into the other hits as the attacker rises in the air, therefore causing rage to have a much stronger effect on them; in fact, the two examples mentioned lack the autolink angle entirely in their first hits.

The 363° angle is the rarest autolink angle in all three games that feature them. In Brawl, it is only used for the hitbox enemies in The Subspace Emissary produce upon careening, in order to prevent a chain reaction of said effect when knocking enemies into each other. In Smash 4, it is used for the dashing portion of Lucario's Extreme Speed Attack custom, as well as the windbox produced by the Back Shield when it is hit, and has the effect of launching the opponent in the direction the attacker is moving into, albeit without launch speed modifications. For the former move, this allows Lucario to connect the second hit afterwards regardless of the direction chosen for the first hit, while for the the latter, it ensures characters do not end up too close behind another with a Back Shield equipped. However, in the case of Extreme Speed Attack, the angle still does not account for the move's increase in distance as Lucario's Aura grows, thus making it difficult to link both hits at high percents. Ultimate is the only game where the angle is used in characters' base movesets, being present in Duck Hunt's up aerial, Lucas' down aerial and PK Thunder 2, Drill Rush, and Skyward Slash Dash.

The 365° angle is the only autolink angle present in playable character moves in Brawl, and a relatively uncommon angle in Smash 4 and Ultimate. Compared to 363°, it sets the opponent's launch speed to 50% of the attacker's momentum, effectively keeping them closer to the attacker as they move in a given direction, and regardless of the knockback caused by the attack. However, the angle still does not function very efficiently, as it disregards how close or far from the center of the hitbox the opponent is. As a result, moves using this angle can be easily escaped with SDI, especially in Brawl where the technique is much stronger.

The 367° angle was introduced in Smash 4, and is present in a majority of playable characters' aerial multi-hit moves, being by far the most common autolink angle in Smash 4 and Ultimate. This angle's function is much more sophisticated than its predecessors', as the direction the opponent is sent in is determined by both the direction the attacker is moving in, and the position of the opponent relative to the hitbox; for example, if they are in the upper end of the hitbox, and the attacker is not moving, they will be sent down and towards the center of the hitbox. This is achieved by setting the opponent's launch speed to the attacker's momentum, plus 20% of the difference between the hitbox and opponent's positional coordinates, so like the 365° angle, it allows multiple hits to link properly even if they do not have set knockback. Additionally, this is calculated after hitlag is over. Combined with the weakening of SDI from Smash 4 onward, these factors make autolink moves with the 367° angle impossible to escape under most circumstances.

However, this angle still has some restrictions that, albeit avoidable, may prevent moves from connecting all hits:

Introduced in Smash 4, the 366° angle is far less common than 367°, but still more so than 365°. It works similarly to 367° in that it launches opponents in the direction the attacker is moving into, while also pulling them towards the center of the hitbox. However, it does not reduce the launch speed obtained from knockback, and its "vortex" effect only lasts for 5 frames, after which the opponent's launch direction exclusively matches that of the attacker's movement at the time the hit took place.[1] It also does not have any caps for launch speed, nor it launches grounded opponents at a fixed angle. These properties make moves using the angle much more consistent against grounded opponents, and allow them to connect more effectively for characters that move fast in a certain orientation, such as Falco, whose vertical speed synergizes well with the angle for his neutral aerial. However, the angle's linking ability becomes worse if the attacker's movement is too versatile, due to its momentum-changing quirk, or if a move causes too much knockback, since its launch speed is not modified to compensate: an example of this is Lucas's neutral aerial, whose hits at very high percents erratically launch opponents around him and become very hard to connect, whereas a move using the 367° angle would keep them close more effectively.

Introduced in Ultimate, the 368˚ angle is used in only a few moves, such as Samus' up smash and Peach Parasol, and appears to function as a mix between the 366° and 367° angles. Additionally, a new feature complementing autolink angles is the ability to set position vectors for moves, which causes the opponent to be launched towards a certain spot relative to the fighter that struck them, rather than the center of the hitbox itself. All hitboxes that use the 368° angle are accompanied by a position vector, but they can be used for any angle, autolink or not.

Position vectors can be used for each hitbox individually, and their data consists of a character bone, horizontal and vertical offsets from the bone, and the amount of frames it takes effect. When an opponent is struck by a hitbox with a position vector, a vector is applied towards the specified position, with a speed so that the opponent covers the necessary distance within the specified amount of frames (which can be a decimal amount); after this, the launch speed drops off rapidly. For example, the first hit of Samus' up smash launches opponents 4 units forward and 22 above her root position (the "top" bone) within 4 frames, then the second hit launches them 1 unit behind and 23 above within 10 frames, with the following hits pulling them progressively closer to her backside to match the move's arc. As a result, position vectors are especially effective in allowing multi-hit moves that change their hitbox placement between hits to connect reliably, which is not easily possible with an autolink angle alone. They are rarely used among the base roster, presumably due to the details of each one having to be programmed manually, but became increasingly common among DLC fighters.

For moves without any specification, the autolink angle is present in all their hits except the final and landing hits. As mentioned above, moves listed as using a 367° angle use a 366° angle in Smash 4, and vice versa.

All listed moves use the "top" bone (the attacker's root point) for their position vector, with the exception of Octaslash, which uses the "rot" bone to account for the direction the move is aimed at. Additionally, for all listed Final Smashes except Shippu Jinraikyaku, the position vectors only apply if the attacker is tiny.