From SmashWiki, the Super Smash Bros. wiki
(Redirected from Footstool jump)
Jump to navigationJump to search 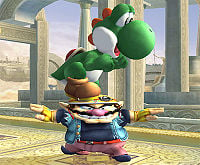 The Footstool Jump (踏み台ジャンプ, Springboard Jump) (StepJump in the game scrips), also known as a Stepping Stone Jump, is a technique in Super Smash Bros. Brawl, Super Smash Bros. 4, and Super Smash Bros. Ultimate. When characters are directly above another character, they can press the jump button to bounce off of the character's head. When used on a grounded opponent, it briefly freezes the opponent while they are in an animation of the player bouncing off their head. When used on an opponent in midair, it causes the opponent to tumble a set distance. It does no damage and can be used between two and six times in succession (depending on which character is used—a faster falling speed means that the character cannot footstool jump as many times), with each jump resulting in approximately half the rebound. Teammates cannot jump on each other unless Friendly Fire is set on (however, in SSB4's Training Mode, the CPUs can jump on each other). Like a normal jump, this jump can be short hopped. Players can also footstool off someone hanging on a ledge, but the character being jumped off will not fall and the footstool will not gain as much height. Pit performs this move in a cutscene in the Subspace Emissary.

While said to be a meteor smash on the Smash Bros. DOJO!!, it does not actually function as a meteor smash, as it does not produce proper knockback, nor can the tumble animation from being footstooled be canceled early like a meteor smash can through meteor canceling. However, if this results in a Fall, it will count as a KO for the footstooling player, even if no damage has otherwise been dealt for that stock.

Characters who are sleeping cannot be footstool jumped until they are awake. Additionally, a footstool cannot cancel out an opponent's move that is in progress, regardless of if they're grounded or not. So if a footstool is used on an opponent that is in the process of performing a move, the player will do a footstool jump that cannot be short hopped, while the opponent continues through with their move without interruption; this act is referred to by the competitive community as a phantom footstool.

In Brawl and SSB4, a fighter footstooled in midair is unable to tech upon landing from their tumble. In Ultimate, teching is possible.

In Ultimate if Piranha Plant is footstooled while it is crouching, it will automatically attack whoever footstooled it, making it the only character with this trait. As of version 13.0.0, fighters that have been put into a crumpling state by Kazuya's Devil Fist can no longer be footstooled. This was done to remove an infinite that would lock the opponent in a crumpling state if performed correctly.

Footstool jumping is primarily used to gimp opponents when edgeguarding. It can also lead straight into meteor smashes with fast startup and/or long vertical range, such as Marth's down aerial in Brawl. Footstools can additionally be used onstage to knock an opponent down, which can then setup for a guaranteed free hit or lock in Brawl and SSB4, or a tech-chase situation in Ultimate. Using the footstool to intentionally achieve these things can be difficult, due to its inability to affect an opponent that is performing a move.

A more advanced application is using the footstool jump to aid in the landing of Marth's down aerial meteor smash in Brawl.

In Brawl, Captain Falcon and Zero Suit Samus can perform an infinite (and thus potential zero-to-death) combo on R.O.B.. Captain Falcon's combo begins with a neutral aerial, followed by immediately fast-falling and performing a footstool on R.O.B. and repeating. When Captain Falcon racks up enough damage, he can use the Knee Smash as a finisher. Zero Suit Samus's combo can be done by starting with her down smash, performing a footstool on R.O.B., then immediately using her down aerial and repeating. Zero Suit Samus can also use her dash attack, forward tilt, the second jab in her jab combo, and/or the Paralyzer to mix it up, as those moves have locking properties, which can lead to finishers such as Plasma Whip.

In SSB4, it is possible with some items to perform an infinite combo by footstooling an opponent, dropping the item on them to cause a jab reset, and repeating. Villager and Pac-Man can do this with their woodchip and Bonus Fruit respectively. This requires a very high amount of technical skill to consistently perform, however. In early versions of Super Smash Bros. for Nintendo 3DS, Zero Suit Samus can use her Paralyzer to perform an infinite footstool combo on Robin akin to the one she could perform in Brawl on R.O.B., due to gaining unusually little height after footstooling the latter; however, this was patched out in version 1.0.4. Mewtwo can also perform an infinite combo on most characters by canceling its footstool jump with Disable and using a well-spaced backward-facing neutral aerial. Perhaps most notably, Peach is capable of an infinite footstool combo known as the "Umeki Rainbow", named after the Peach player Umeki, who was able to consistently perform it in tournament sets. The combo uses Peach's floating ability to fully cancel the upward momentum of a grounded footstool jump, as well as the first hit of her up aerial. Prior to version 1.1.5, the combo was possible on a large portion of the cast, but her up aerial's range against grounded opponents was nerfed in 1.1.5, resulting in the combo now only being possible on a few of the taller members of the cast.

In Ultimate, the ability to tech midair footstools upon landing effectively results in most infinite footstool combos (except for the ones that only utilize grounded footstools) no longer being guaranteed. In addition, characters must wait for 16 frames after attacking before they can footstool (starting from when the attack ends or is interrupted).

The Footstool Jump is very similar to one seen in Kirby Super Star and in Kirby & The Amazing Mirror, where Kirby could perform large jumps by jumping on the heads of his potential allies. It is also similar to how players can bounce on other players in some minigames in the Mario Party series, as well as modern entries in the Super Mario Bros. series.

Piranha Plant being able to attack players when it is footstooled while crouching can be considered a reference to its main method of attack in the 2D Mario games.

"When above enemies, pressing

or flicking up on

will let you use them as a footstool to jump even higher."