For the tournament, see Tournament:Float. 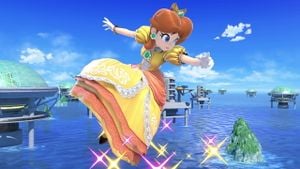 Daisy floating while performing a neutral aerial in Ultimate.

Floating refers to a fighter ability exclusive to Peach that originated in Super Smash Bros. Melee, enabling her to temporarily hover if the player performs and holds their jump input. As Daisy is Peach's Echo Fighter in Super Smash Bros. Ultimate, she retains Peach's floating ability as well, with the exact same functionality. 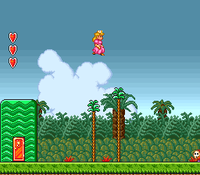 Peach's floating ability as it appears in Super Mario All-Stars.

Floating lasts for several seconds (in Brawl, SSB4 and Ultimate, 2.5 seconds) at a time. Peach can move a large distance horizontally while floating but will not move vertically. The player can also press the attack button while floating to perform an aerial attack, which will still keep them floating after the duration of the attack is finished. The float is a major part of Peach's recovery and is also essential to playing her competitively, especially due to the many powerful combos and mix-ups it allows her to perform, as well as techniques such as jump-canceled fast falling, auto-floating, and float canceling. Floating also allows Peach to always perform any of her aerial attacks while holding a small, throwable item, such as one of her Vegetables, without having to Z-drop the item first; this allows her to be more threatening against opponents than most other characters while holding such items.

The Super Leaf item functions similarly to Peach's float, but can be used by any character.

In order to float on command, and at any height, the player must jump and press down when at the desired height while holding the jump button. Once the player has hit down while holding the jump button, they can hold up and let go of the jump button, or simply continue holding the jump button, and keep on floating. This technique has been dubbed the "auto-float" by SuperDoodleMan. Floating at different heights has varying uses depending upon which height the player chooses, but they will generally find themselves floating either at short hop height or just above the ground. If they are falling down, and they have yet to use their float, they can press down and the jump button simultaneously, but make absolutely sure to do so at the same time; otherwise, they will waste their double jump and just float, which could prove disastrous while being edgeguarded. A double blue circle from a double jump or the very distinct sound effect of Peach's double jump will give the player a notice that the technique has been performed successfully.

Float canceling (or FCing) is a Melee-exclusive bug relating to floating. If Peach uses an aerial attack while floating, landing during the attack (whether still floating or not) will result in a normal 4-frame landing as if the attack was autocanceled, effectively skipping landing lag altogether. Float canceling is more potent at lag reduction than L-canceling (which can only halve landing lag, not completely skip it) and is significantly easier to perform, making the technique essential for high levels of play.

Using float canceling to generate effectively lagless aerials is arguably the most important aspect of Peach's one-on-one combat, as it allows her to quickly and easily utilize aerials on grounded opponents to setup combos or pressure, and also makes her much more difficult to shield grab while in the air. Float canceling can be used in conjunction with ground-level auto-floating to allow Peach to jump, use an aerial, and land ready to perform another action faster than any other character. Peach's forward aerial is commonly used in this fashion, as it is useful for spacing and is very safe on shield, allowing it setup guaranteed grabs on a shielding opponent.

In Brawl, SSB4 and Ultimate, landing during an aerial attack performed out of Peach's float causes her to undergo the entirety of the aerial's normal landing lag if she does not land during the aerial's autocancel frames, removing the float cancel technique.

Some uses of ground floating include, but are not explicitly limited to:

At her full jump height, the player can abuse the benefits of Peach's aerial arsenal, especially the spacing on her forward aerial and down aerial. Peach's full jump height can also be used to punish overaggressive combatants or overzealous players who like to jump the gun and attack too early. For example, a player who is using Falco and constantly firing off SHLs, or a player busy SHFFLing, can be punished with a float canceled aerial. Ground floating should be used against opponents who remain airborne; it may also be used for following an opponent's DI from one of her launcher attacks.

In Brawl, if Peach stops floating while in the middle of a move, it can cause the attack's late hitboxes to hit opponents even if the clean hit has already connected. This applies to her neutral and back aerials and can be used with precise timing to connect with both parts of the attack instead of just one. This glitch is likely due to floating and falling being considered different states, confusing the game into believing that the clean and late hits should be treated separately.

In Ultimate, Peach can cancel her vertical momentum by initiating a float at any time during her jump and canceling the float instantly by falling down. This alleviates Peach's normally extremely low gravity value, allowing her to instantly descend downward akin to fast-fallers after the peak of her jump, and can aid her ability to effectively pressure opponents.