The UltRank 2022 lists the world's top 100 Super Smash Bros. Ultimate players in the second half of 2022 as compiled by OrionRank, EchoRank, and ΩRank. The rankings were announced alongside SSBMRank 2022 in a series of start.gg articles published from January 11th-20th, 2023.

Following a vote from the PGRU v3 panelists, UltRank 2022 returned to an algorithmic format. The algorithms of OrionRank, EchoRank, and ΩRank were each run through the period from June 18th, 2022 through December 18th, 2022, the intended period of the cancelled season which would have followed the PGRU v3, and then combined into one ranking. Though each ranking system uses a slightly different system to tier tournaments, a unified TTS (Tournament Tiering System) was created to view the most generally impactful tournaments.

Only tournaments that are C-Tier and above on the TTS are listed, though others were used.
List with approximate point values 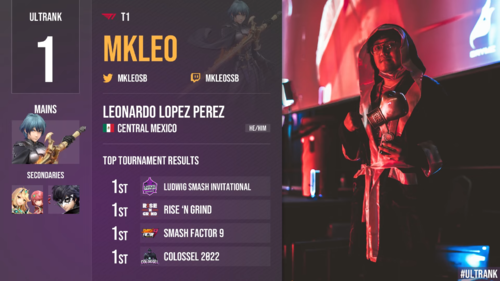