The PGR v5 lists the world's top 50 Super Smash Bros. for Wii U smashers during the period of January through July 2018, as compiled by PG Stats. On November 10th, 2017, PGStats announced an official offseason along with the ending and beginning dates for PGR v4 and v5, respectively. The offseason lasts from December 4th, 2017 to January 18th, 2018, with GENESIS 5 being the first event of the regular PGR v5 season. As exceptions, three notable tournaments that had been scheduled prior to the offseason announcement were still counted as part of the PGR v5 season, those being Umebura T.A.T., the Sumabato Tokaigi Qualifiers 1, and 2. With the release of Super Smash Bros. Ultimate, it was confirmed that CEO 2018 would be the last event of the season.

While the Tournament Tier System returned, it again featured a number of notable changes, first announced in a blog post by PGStats member PracticalTAS. Most significantly, prize pools now have no effect at all on tournament ratings. Individual tournament values were hidden, leaving only the broader tiers publicly visible. Certain tournaments with a consistent reputation of notability will now be given "pre-ratings" that serve as a bare minimum value, with the ability to rise above the pre-rating still possible. Finally, the general values necessary to reach each tier besides the C-tier were heightened; and the S+-tier was removed, with the S-tier taking its place and with a new A+-tier in between it and the A-tier. 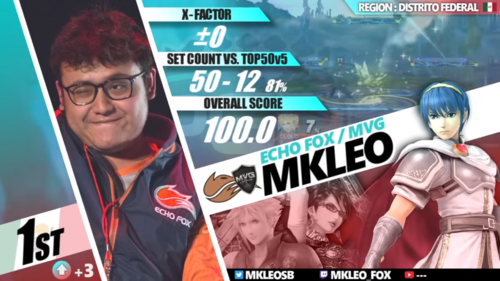 The day before they began unveiling the regular top 50 rankings, PGStats released a list of the five players who most closely missed the cut for the PGRv5 top 50, known as "Area 51." They were unranked between each other, and as such are all considered to be effectively ranked #51.

Similar to the previous season, players outside of the official rankings top 50 were also counted for this list, making up a total of 100 players in this season's X-Factor rankings.