For other people with the name Jason, see Jason (disambiguation).

ANTi is an Ultimate Snake and Mario main from Long Island, New York who is currently residing in Copiague, New York. He was considered one of the best Snake and Mario players in the United States prior to his retirement.

In Super Smash Bros. 4, ANTi was a Mario and Zero Suit Samus main with a strong Cloud secondary, and is considered to be the best Mario player in the world at the end of the game's lifespan and one of the best Mario players of all time, along with Ally. He is well known for his extensive character roster, and regularly employs counter-picking in tournament to secure more advantageous match-ups. He notably won CEO 2016 and was considered a top 10 player in 2015 and 2016. ANTi is currently ranked 2nd on the New York Smash 4 Power Rankings and 14th on Panda Global Rankings 100.

In Brawl, ANTi is a Meta Knight player, and is considered one of the best Meta Knight players in the world. He is well known, much like in Smash 4, for his significant character pool. ANTi is currently ranked 2nd on the 2018-2019 SSBBRank and was ranked 5th on the final Tristate Brawl Power Rankings.

He is the 8th player to take a set off of ZeRo, the 4th to eliminate him, and the 2nd to defeat him in a Best of 5 without losing a single game, doing so at WNF 2.5.

On June 22nd, 2016, both ANTi and Dabuz were signed by Dream Team.[1] On August 22nd, amidst allegations of mispayment, ANTi and Dream Team would part ways.[2][3] On September 13th, ANTi was signed by Immortals.[4] Nearly two years later, on September 10th, 2018, ANTi announced his departure from Immortals.[5] On April 17th, 2019, both ANTi and Larry Lurr joined T1.[6] Pending sexual assault allegations levied towards him, on July 2nd, 2020, ANTi announced that T1 dropped him from the team.[7]

ANTi specialises in utilising Meta Knight's effective tilt game. He will typically string single hits of tilts together, which further combo into different moves, which he determines based on his opponent's percent.

He is reputedly known for having among the best matchup knowledge of all players in Brawl against many characters, such as Olimar and Diddy Kong, to the extent that other top professionals, such as Mew2King and Ally used to study his matches closely to implement his strategies into their own plans during the Brawl days.

ANTi's playstyle focuses on his exceptional capability to manifest and maintain pressure situations, being especially proficient at following his opponent's movement, retreating, and defensive options. In doing so, this enables him access to his unique form of aerial and ground based movement pressure, often running circles or tomahawk jumping around his opponents. These pressure microcosms he establishes provide him the ability to pressure his opponents into reacting, allowing him to punish when they overextend. ANTi is adept at following his opponent's aerial drift, allowing him to react and cover landing options, pressure from below, or extend juggling situations. ANTi is very perceptive of airdodge and shield habits, and will exploit them to extend combos, obtain grabs, or kill.

In early July 2020, amidst a wave of sexual harassment allegations in the community, several users came out accusing ANTi for sexually assaulting them: Kassandra Ramos stated that ANTi forced her to drink liquor despite being underage and tried to make out with her[8] while a few others have stated that ANTi had/tried to forcefully kissed them.[9][10][11] One of those that accused ANTi was a girl named Samantha who stated that ANTi had sex with her when she was only 16.

ANTi later responded to the accusations in a TwitLonger, claiming that Samantha lied that she was 18 when they had sex and that many women in the community wanted to attack him since they had complaints against him, concluding that he has distanced himself from the community.[12] He later deleted the TwitLonger in favor of speaking to a lawyer.[13]

Months later, on January 14th, 2021, ANTi released a video where he apologized for both his inappropriate conduct in tournaments and how he handled the accusations in July. Although he maintained his statement on not knowing Samantha's actual age, stated how his actions were not illegal under a Florida law, and denied forcing her to drink alcohol, he nevertheless apologized to her, stating that he should have done more to know her actual age such as checking her ID. He also dispelled rumors about his group chat with ZeRo and Nairo, stating that he only used it to keep himself in check and to make sure the other two did not do anything extreme.[14] 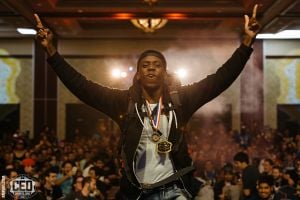