Fox is a playable character in the Brawl mod Project M. He was remade to be nearly identical to his Melee counterpart in terms of attack hitboxes and animations, but not without slight nerfs due to his dominance in the Melee metagame. He is ranked 8th out of 41 at the top of the A- tier on the official tier list, a considerable drop from his first-place position in Melee but a substantial improvement over his standing in Brawl, where he is ranked 15th out of 38 on its tier list. He retains the same placement in the official Project+ tier list, though he is now ranked near the end of the A+ tier.

In Project M, Fox plays very similarly to his Melee counterpart, albeit with some nerfs. His KO power is somewhat reduced, his on-stage recovery is less safe, and his infamous shine spike is slightly less potent than it used to be. He retains his incredible mobility, his heavily disjointed hitboxes, deadly combos, and good options on both defense and offense. While his blaster deals less damage at a distance, it is still sufficient for camping out characters that refuse to approach Fox. Despite a damage and knockback nerf, Fox's up smash can still reliably KO at reasonable percentages, and can more easily combo fast fallers. Most of Fox's moves are still oriented toward comboing opponents, with his aerials and tilts remaining largely lag free and great for repeatedly hitting opponents. Fox's up throw can set up for many moves, like his up aerial, back aerial, or a tech chase at lower percentages on fastfallers with an up smash or another grab.

On top of the nerfs, he must deal with the weaknesses he had in Melee; his extremely high falling speed and gravity (the highest in the game) and low air speed make him very susceptible to combos and chain grabs and his extremely low weight makes him very easy to KO horizontally. The linearity of both Fire Fox and Fox Illusion make Fox easy to edge guard or gimp, especially with the increased landing lag on both special moves. As such, Fox often has trouble making it back to stage despite only being launched to a distance where many characters could easily recover. This is exacerbated in the harsher Project M environment, where many characters now have tools to punish and gimp Fox harshly for mistakes that players make with him.

Overall, he is still a dominant character in Project M, because he has transitioned fairly well from Melee.

Fox now has an alternate costume based off his appearances in Melee and in Smash 64, both of which are based on his designs in Star Fox 64 and other earlier Star Fox games. There are four variations of this costume: the original and the three team colors used in Melee.

Fox's classic costume received more recolors, including one based on his appearance in Star Fox for the SNES. He also has secret costumes inspired by the McCloud family bloodline. 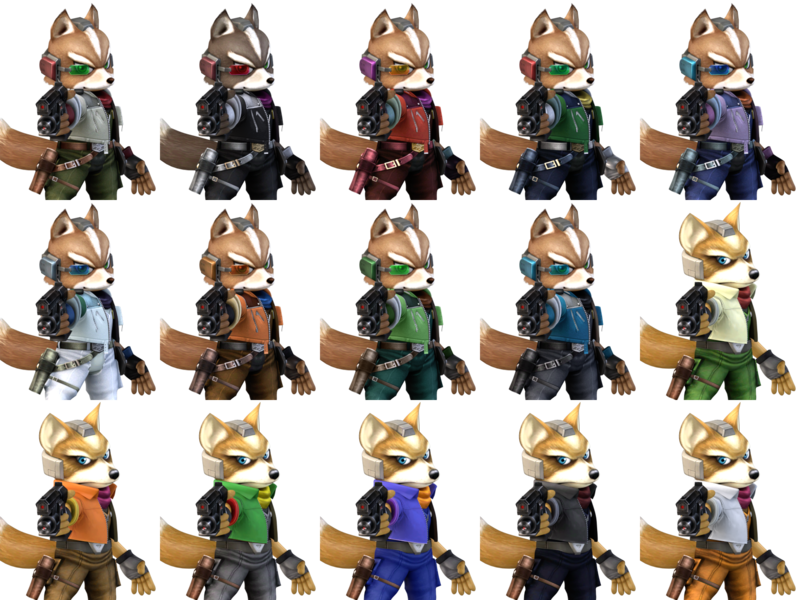