Mewtwo is a playable character in the Brawl mod Project M. After being cut from Melee, it returns with significant buffs. In Project M, it is one of two characters that were not originally playable in Brawl, the other being Roy; in Project+, it is one of three, with Knuckles being the third. Mewtwo was the second Clone Engine character announced for Project M, based on Lucario.

As with Melee, Mewtwo is a character that defies most character archetypes in that it is a tall, floaty, slow middleweight with a long disjointed range much like Zelda. Its long tail gives it an advantage against most characters in the cast, similarly to other disjointed characters, due to it allowing it to space with ease. It also has good zoning capabilities as a result of its tail attacks and Shadow Ball. It also has many versatile finishers, such as its smash attacks and down aerial. It also has one of the best grab and throw games of the cast, having two chain throws (up and down), two KO throws (up and back), and two combo throws (forward and down). Mewtwo also has one of the best recoveries in the game due to its fast air speed, slow falling speed, float mechanic, high double jump, and all of its specials being useable for recovery. Mewtwo's greatest strength is its combo game, which is contributed to by its reach, float, frame data, low knockback attacks, and Teleport's new function going from Melee to PM, offering for versatile combos that can lead directly into its finishers.

However, despite the numerous buffs it received, Mewtwo still has flaws. Its greatest weakness remains its survivability; even with its heavier weight, it maintains its tall frame and floatiness, and when combined with the harsher environment, makes it easy to combo and KO Mewtwo vertically, more so than the slightly floatier Samus as a result of her extra weight. It also may have trouble KOing outside of combos, despite having many K.O options, due to its finishers generally being slow or having poor range. Mewtwo also has an extremely high technical learning curve to use all of its techniques to the fullest, requiring fast reflexes and nimble fingers.

Despite these weaknesses, Mewtwo's strengths and buffs significantly override them, making it among the most dominant characters in PM's metagame. However, after update 3.5 released, Mewtwo was notably nerfed, thus slightly reducing its success, though not enough to significantly harm it.

Mewtwo was significantly buffed from Melee to Project M. It has almost twice as much range on its tail attacks, its comboing ability has improved considerably with the addition of the float and Teleport's new properties, its survivability has improved, and all attacks received improvements to either damage, knockback, or range. Confusion and Disable were also massively buffed, however, they are still considered situational. While Mewtwo has been nerfed in updates following version 3.0, the nerfs have not severely hurt its tournament results.

In Project+, Mewtwo's trophy can be obtained by clearing Classic Mode and All-Star mode.

Mewtwo
A Genetic Pokémon. This legendary Pokémon was based on a recombination of Mew's DNA, created by a scientist after years of research. However, Mewtwo greatly differs from Mew in both size and personality and it is said to have the most twisted and savage heart among all Pokémon. Mewtwo has incredibly high combat abilities and uses Psychic-type attacks.

Mewtwo's design received a large overhaul from Melee to Project M. Where Melee based its design from Generation I and II (games for the Game Boy, Game Boy Color and Nintendo 64), its new design reflects Generation IV (games that were for the Wii and Nintendo DS, and made around the same time as Super Smash Bros. Brawl). It matches Brawl's more realistic environment like other characters.

It retains all of its costumes from Melee, while also gaining a new gray color scheme and alternate costumes based upon its armor set seen in Mewtwo Strikes Back.

The back of the gray and gold armor color schemes features the inscription "PKMN-150" (which is Mewtwo's National Pokédex number in the games), while the black one instead features the Team Rocket logo.

In Project+, Mewtwo received even more costumes, bringing the total up to 15.

Several of the new costumes are recolors. One is for Mewtwo's default skin (based on its sprite from Pokémon Yellow), and two are for the armored skin. There are also four new alternate costumes, inspired by Shadow Mewtwo from Pokkén Tournament. Extra details include the crystal attached to its left shoulder and the crystalline tip of its tail. 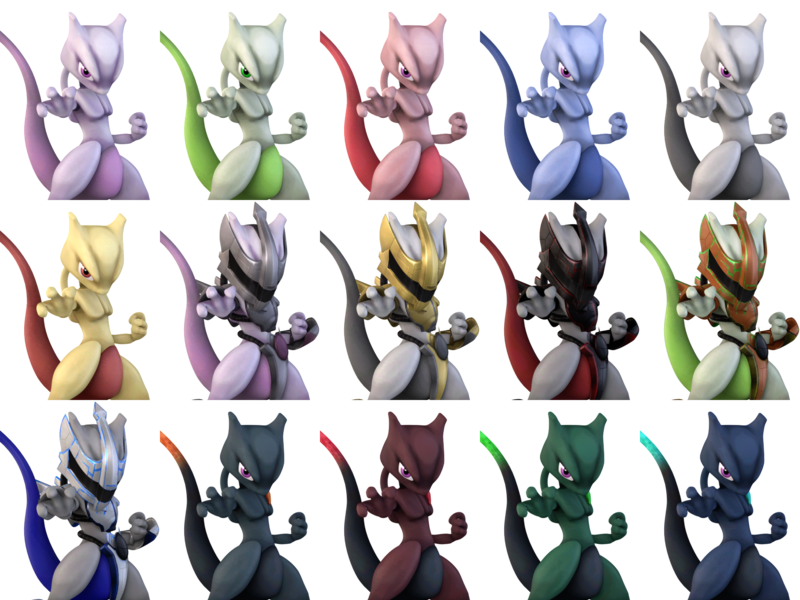 Z-Secret Costume: Shadow Armored Mewtwo (based on the color scheme of Shadow Pokémon from Pokémon XD: Gale of Darkness)