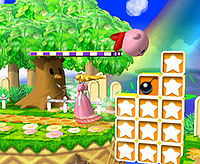 Wind is also present in some stages of the Subspace Emissary. Headwinds make it more difficult to progress through a stage, as characters will be pushed backwards, while tailwinds force the character to progress much faster, but requires faster reactions. It's also present in the subsequent game's Smash Run in a similar vein, however, the wind will constantly change directions in random directions for a set amount of time. Strong winds can also appear as a hazard in Spirit Battles, and some spirits will reduce or eliminate the wind's impact.

Unlike other effects like gravity changes, wind does not have a universal effect, and wind zones are defined for each source of wind, taking up a given area on a stage, similarly to a hitbox, although wind zones are typically rectangular rather than spherical.

Stages that include winds are:

Only one source of wind can affect a character at a time. If multiple wind zones overlap a character, only the wind of the zone with the higher priority will push the character. Stage wind always takes priority over strong winds from Spirit Battles, and thus can serve as temporary refuges from strong wind, such as in the Whispy Woods and Fox Luigi Spirit Battles.